Optogenetics is a technology that combines optics and genetics. With the help of optogenetics technology, it is possible to precisely control the activities of specific types of neurons in the brain, spinal cord, and peripheral nerves of living animals or even animals that move freely. The accuracy of optogenetics in time can reach the level of milliseconds, and the accuracy in space can reach the level of individual cells. In 2010, optogenetics was selected by Nature Methods as the method of the year. In the same year, it was regarded by Science as one of the breakthroughs in the past decade. This technology is currently widely used in the field of neuroscience and may be used in the treatment of a variety of neurological and mental diseases in the future, such as Parkinson's disease, Alzheimer's disease, epilepsy, spinal cord injury, schizophrenia, etc.

Optogenetics technology is to use genetic means to express channel proteins in specific cells to achieve the goal of activating or inhibiting neuronal activity through light. The principle of activation or inhibition lies in the permeability of different channels to cations or anions: if the cell is transferred by ChR channel, the channel opens when the cell is irradiated by the blue laser, and the cation flows in, which will generate a depolarization potential and then activate the cell; If the cell is transferred to the HR type channel, the anion will flow in when the cell is irradiated by the yellow laser, which will generate a hyperpolarized potential, which makes the action potential difficult to release and inhibits cell activity; In addition, there is a type of light-activated or inhibited channel optoXR, which affects cell activity by changing the intracellular kinase system after light activation. Therefore, the core technology of optogenetics technology lies in the selection of light sensitivity channels.

ChR2(H134R): 470nm blue light excitation. Mutantant of ChR2. The protein can generate twice the photocurrent, but the channel switching speed is also twice as slow as the wild ChR2.

oChIEF: 450nm-470nm blue light excitation. In some neurons, it can respond to high-frequency light (-100Hz) stimulation, accelerate the speed of channel closure, and reduce the inactivation rate under continuous light stimulation.

ChrimsonR: 590-600nm excitation. A point mutation of K176R was made to increase the closing speed of the channel, which is suitable for occasions with higher stimulation frequency.

ChRger: 470nm blue excitation. Relatively non-invasive (the fiber is placed on the surface of the skull).

Arch: Excitation around 566nm. Archaerhodopsin is an outward rectifier proton pump activated by a yellow laser, which can move positively charged protons from the neuron to the extracellular environment, making the neuron in a hyperpolarized state. Under certain conditions, it can be used to increase the intracellular pH or decrease the extracellular matrix pH. Compared with NpHR, when the laser is turned off, Arch immediately recovers from the channel open state to the closed state.

Mac: 540nm excitation. Also known as Leptosphaeria maculans fungal opsins, it is a proton pump that can move positively charged protons from the neuron to the extracellular environment, making the neuron in a hyperpolarized state.

ST-eGtACR1: Excitation at 515nm. GtACR is a Cl-channel, and its efficiency is much higher than that of NpHR and Arch plasma pumps, and it is quickly suppressed. It is suitable for situations where the lighting time is very short, and the behavioral effect is very short. 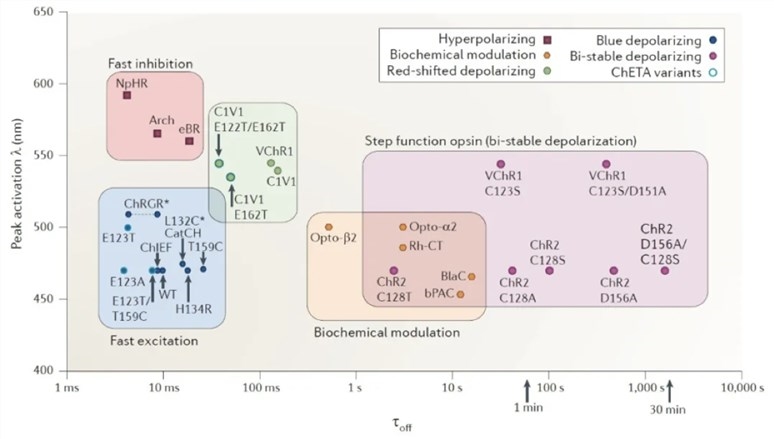 The application of optogenetics technology with the help of viral vectors generally includes the following key steps: 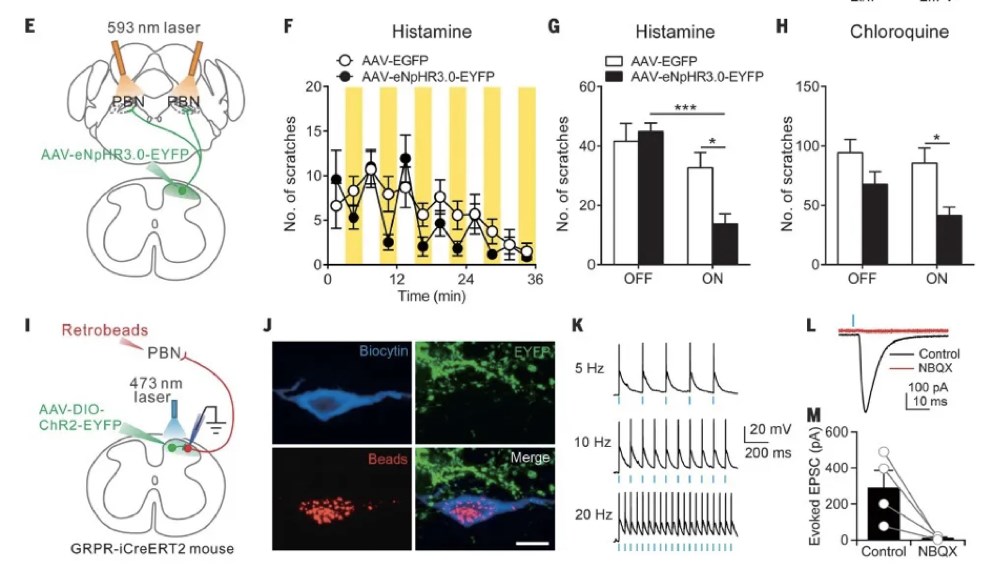 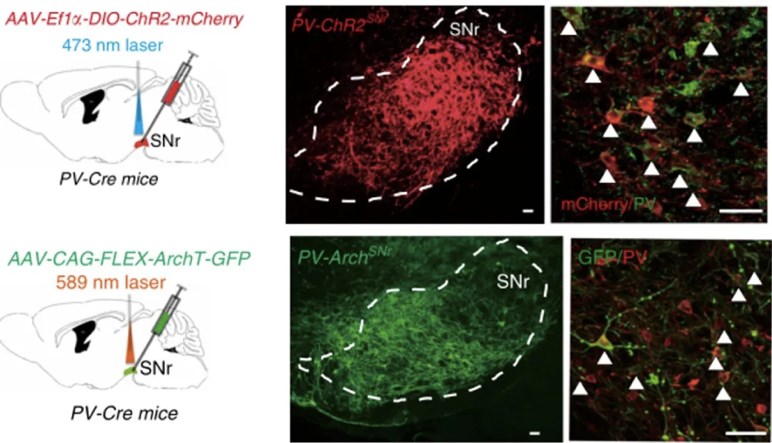 The emergence of optogenetics technology can help researchers to better understand the neural mechanism between the brain and behavior, however, the current application of optogenetics is mainly focused on rodent small animal models. To maximize the potential of optogenetics and make it an important tool for studying human cognition and behavior, it is prudent to first prove its safety and effectiveness in non-human primates (NHPs). The anatomy, physiology, genetics, and behavior characteristics of NHPs are closer to humans than any other animal model. The homology between NHP and humans makes it the best experimental model for understanding human brain functions and obstacles. The use of optogenetics to analyze the neural mechanisms at the cellular level, neural circuit level, and brain level of NHPs is expected to reveal the basic mechanisms of human brain functions and disorders.

However, there are many technical obstacles to the use of optogenetics in non-human primates, such as the selection of viral vectors, promoters, and opsin, as well as injection doses. Due to the anatomical and genetic differences between rodents and NHPs, it means that those optogenetic strategies used in rodents are not always effective in NHPs. For researchers who want to carry out NHPs optogenetic experiments, there are very few experimental guidelines. 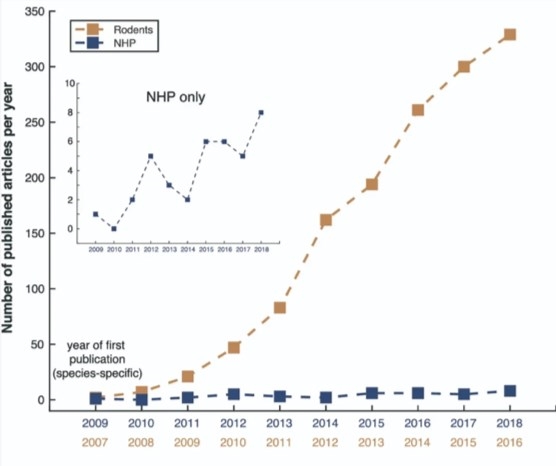 On October 19, 2020, Sébastien Tremblay of the University of Pennsylvania published an article entitled An Open Resource for Non-human Primate Optogenetics in Neuron [3], which summarized the latest progress of optogenetics application in non-human primate models. This article summarizes the methods and results of more than 1,000 injection experiments (including unpublished data) in 45 laboratories around the world and integrates them into an optogenetic non-human primate experiment data resource library to help expand the application of optogenetics in NHPs.

The database contains 6 different strains of NHP, most of which experiments were performed on rhesus monkeys (71%); the most used viral vector is AAV2/5 (36%), followed by AAV2/9 (13%); The most widely used promoter is CaMKIIa (37%, specifically labeled projection neurons), followed by hSyn (22%, specifically labeled mature neurons) and CAG (11%, broad-spectrum expression promoter). In addition, the most widely used reporter gene in NHP is EYFP (45%), followed by GFP (17%) and mCherry (13%). 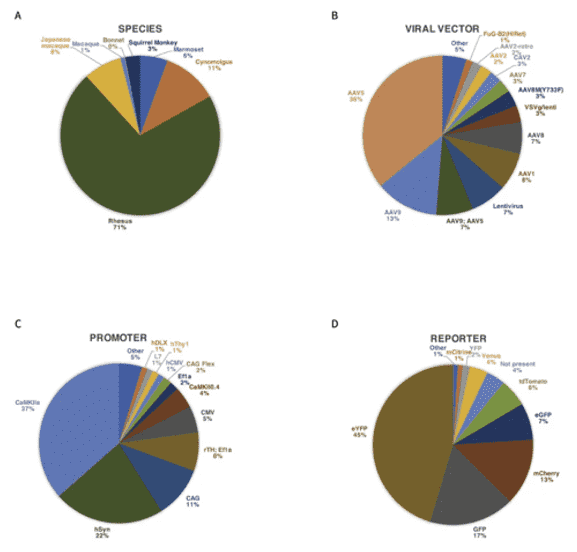 At the same time, the database also analyzed the most commonly used optogenetic opsin in the NHP: about 39% used the activated opsin-hChR2 (H134R), about 25% used the inhibitory opsin, including 6% of ArchT, 6% of Jaws. 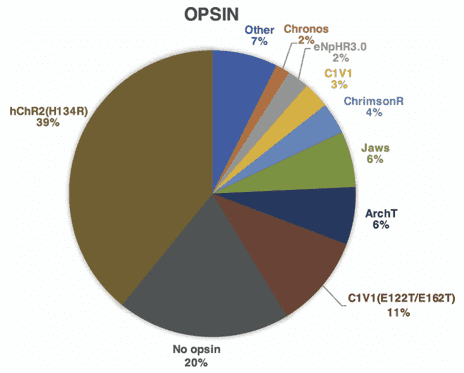 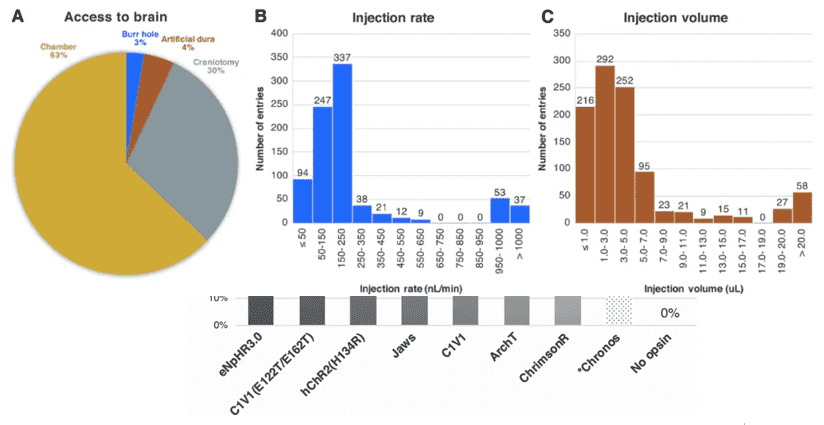 It is generally believed that a slower injection speed can reduce the trauma to the brain tissue. In addition, since the brains of NHPs are larger and more complex than those of rodents, the injection volume of the viral vector will also affect the experimental results. From this database, successful experiments with injection rates ranging from 6 nL/min to 5000 nL/min were analyzed, most of which focused on 200 nL/min. The injection volume is mostly 1-3 μL.

Thank you for your interest in Applications of Optogenetics in Rodents and Non-human Primates. Please provide us with your contact information and your local representative will contact you with a customized quote. Where appropriate, they can also assist you with a(n):