Calcium imaging refers to the use of calcium ion indicators to monitor the concentration of calcium ions in cells, tissues or culture media. This technique is widely used to study calcium signaling in neuronal activity in vivo and in vitro.

Calcium ion is an essential intracellular messenger in mammalian neurons. In the resting state, the intracellular calcium ion concentration of most neurons is about 50-100 nM, which can increase 10-100 times during electrical activity. As an intracellular signal, calcium ions can trigger responses, such as altering gene expression and the release of neurotransmitters in synaptic vesicles. Because there are ion pumps in cells that selectively transport these ions under various signal stimuli, the intracellular calcium concentration is highly dynamic. Calcium imaging technology uses the advantages of calcium ion flow and special fluorescent dyes or protein fluorescent probes (calcium indicator) to directly visualize calcium signals on living nerve cells, so as to achieve the purpose of monitoring neuronal activity. 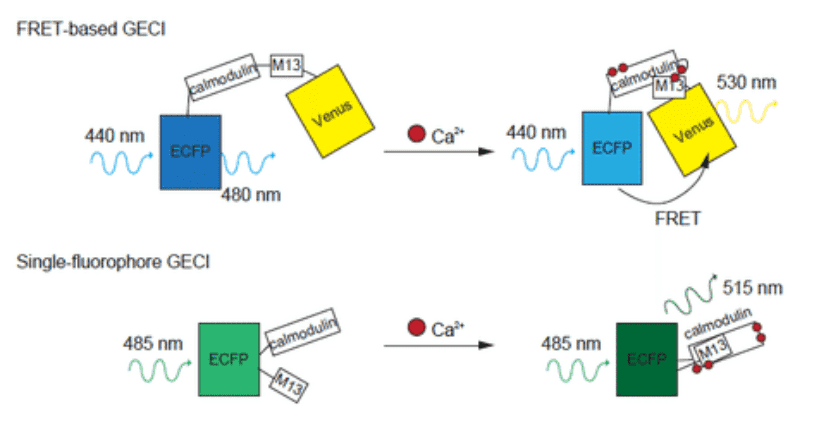 Fig.1 Schematic diagram of the principle of FRET-based GECI (A) and single fluorescent protein GECI (B).

GECI is a fluorescent protein derived from green fluorescent protein (GFP) or a variant fused with calmodulin (CaM) and M13. These proteins can be easily transfected into cells and can be measured non-invasively in vivo, so this technique is widely used for imaging neural activity, T cells, etc. The following table lists commonly used GECIs.

Calcium imaging technology is mainly used in the study of the nervous system to study the changes of calcium ions in the intricate nervous system, including the following aspects:

1. In vitro study of presynaptic and postsynaptic functions. Combining calcium ion imaging and two-photon microscopy technology, the researchers found that the calcium ion signal is limited to the dendritic spines (postsynaptic sites for excitatory transmission between neurons).

3. In vivo study of neuronal circuits in different animal models. At present, calcium imaging technology can record the action potential of a single cell in rodents, fruit flies, nematodes, zebrafish and even primates.

4. Study the neuronal activity of behavioral animals. The development of calcium imaging technology makes it possible to record the neuronal responses of animals at rest or in motion in real time.

How to use calcium virus imaging tools for research?


Step2: Transport the calcium ion indicator to the target site

Calcium imaging technology is usually used in conjunction with microscopy to record changes in calcium ions.

Thank you for your interest in Calcium Imaging Tools. Please provide us with your contact information and your local representative will contact you with a customized quote. Where appropriate, they can also assist you with a(n):