Introduction of EEG and ERP

Electroencephalography (EEG) is the recording of electrical activity along the scalp. The flow of current due to the firing of neurons in the brain results in a voltage fluctuation that is measured by EEG. The measurement of the brain’s response to a stimulus is called event-related potential (ERP). The stimulus can be sensory, motor, or cognitive in mature. ERPs are task-oriented potentials.

Techniques of EEG and ERP Recording

An EEG recording could be noninvasive or invasive. The noninvasive procedures use surface electrodes and hence are safe and painless.

Electrodes are placed on the scalp in special positions to acquire the EEG data. These are small metallic disks, usually made of silver, gold, tin, or stainless steel; and covered with a silver chloride coating. The positions are measured on the scalp relative to the known skull landmarks, from the front at the nasion to the inion at the back of the head and side to side from the two ear canals. This allows researchers and clinicians in different labs to standardize their measurements and reporting. The location of each electrode is labeled with a letter and a number.

Properties of EEG and ERP Signals

The EEG can monitor human brain activity noninvasively with a precision of milliseconds. This is necessary for understanding the foundations of cognitive functions. Continuous EEG recordings consist largely of oscillations at different frequencies that fluctuate over time and provide valuable information about a subject’s brain state.

The common way of analyzing event-related EEG signals is the calculation of ERPs. An ERP is a response to sensory and cognitive events usually consists of several peaks and deflections, which, if characterized by latency, morphology, topography, and experimental manipulation, are called ERP components. ERPs are caused by processes that might involve memory, attention, or changes in the mental state, among others, whereas the processing of the physical stimulus is reflected by evoked potentials.

Application of EEG in Neurological Disorders

Numerous studies have reported that spectral EEG measures showed a relationship to scores on common neuropsychological tests assessing cognitive functions. EEG plays an important role in many aspects. It is used in medicine to monitor brain activity (or the lack thereof) to help determine brain death in patients, injury area after stroke or head trauma, epileptic activity, sleep disorder, and many others. In other studies, it helps to investigate various cognitive functions, such as memory or attention. It is also used in language and clinical research; for example, studies that investigate EEG patterns in individuals with aphasia.

ERP reflects the activity originating within the brain and is phase-locked to the stimulus onset. ERP provides a powerful tool for objective assessment of cognitive status and clinical studies of brain functions such as attention, memory, and language. 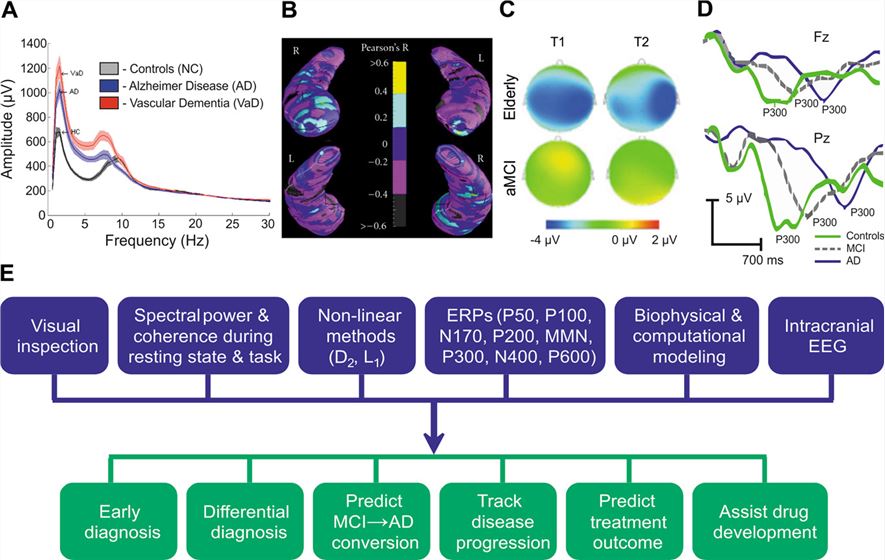 Fig.2 Examples of promising EEG/ERP findings in AD research and a chart summary of potentially useful methods and markers. (Horvath, 2018)

EEG and ERP methods in clinical neurophysiology might serve as important tools in the early diagnosis of cognitive dysfunction. Creative Biolabs has a very strong technical force in the field of neuroscience research, focusing on EEG/ERP research. We can help you better study the EEG/ERP to reveal the basic mechanism of neurobiological diseases. If required, please contact us for further details.

Thank you for your interest in EEG and ERP Analysis. Please provide us with your contact information and your local representative will contact you with a customized quote. Where appropriate, they can also assist you with a(n):