Memory formation has multiple temporal phases that engage specific molecular, cellular, and systems mechanisms. Genetic approaches have been extensively used in memory studies; the approaches can be divided into two major categories. Forward genetic studies are focused on the identification of genes responsible for memory processes of interest. In contrast, reverse genetic studies, start with candidate genes that may be involved in memory, and the goal is to discover and understand the possible memory phenotypes associated with that gene.

Epigenetic mechanisms, which change gene expression but do not alter the underlying DNA, were widely known to be involved in the formation and long-term storage of cellular information in response to transient environmental stimuli during development. 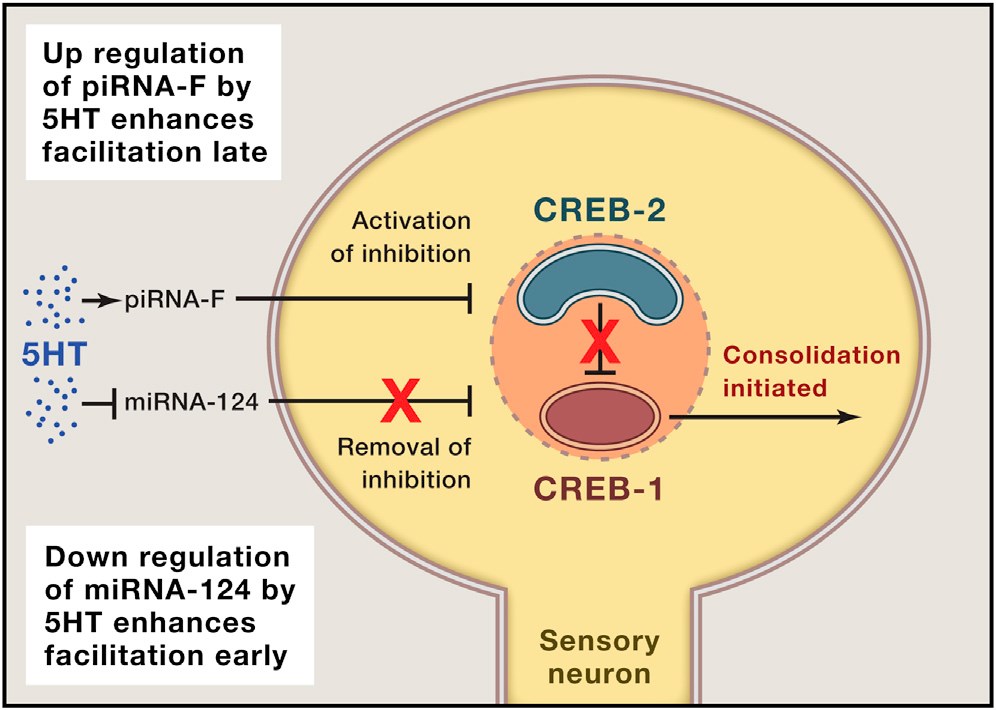 Both excitatory and inhibitory transmitters can activate signaling pathways that switch transcription on or off via CREB-1 and CREB-2. Another important regulator of transcription is small, non-coding RNA molecules. In Aplysia, the most abundant, well-conserved microRNA that is specific to the brain is miR-124. This molecule is found in the sensory neuron, where it binds to and inhibits the messenger RNA of CREB-1. Serotonin inhibits miR-124, thereby disinhibiting the translation of CREB-1 and making possible long-term memory transcription. Thus, serotonin regulates both piRNA and miRNA molecules: a rise in piRNA-F silences CREB-2, while a drop in miR-124 activates CREB-1 for over 24 hr, establishing stable, long-term changes in the sensory neurons that consolidate memory and put it in long-term storage. These findings reveal a new, epigenetic mechanism for regulating the gene expression underlying long-term memory storage.

Genetic Manipulations in Studies of Memory

Fig.2 Schematic diagram of pre- and postsynaptic cellular processes related to the second messengers cAMP and cGMP involved in neuroplasticity in the hippocampus. (Kelly, 2020)

In a former study, scientists generate a special mutant mouse strain, in which the knockout of the NR1 gene is both inducible/reversible and is restricted to neurons of the CA1 region. By carefully characterizing these mutant mice, they have found that NMDA receptors in the CA1 region play a crucial role in acquisition and memory consolidation, but not in memory retrieval. This approach has provided a powerful way to temporally associate gene expression in a tiny brain region with a behavioral response.

A novel genetic/chemical approach has been developed to inactivate the activities of any protein kinase at the protein level. By using this approach, scientists have generated a special transgenic mouse strain, in which a mutant CaMKII gene is overexpressed in neurons of the forebrain. This mutation leads to a conformational change of the ATP binding pocket of the kinase so that not only the nature ATP ligand can bind to it and activate the kinase, but also a synthesized ATP inhibitor can bind to it but inhibit the activity of the kinase. Therefore, by treating the mice with or withdrawal this inhibitor, we can switch off and on the activity of the protein kinase, respectively. Furthermore, because the ligand directly acts at the protein level, the time-resolution to inactivate and restore the kinase activity is very high. By taking this advantage, we have found that a stable level of CaMKII activities during learning and consolidation processes is required for normal memory formation. 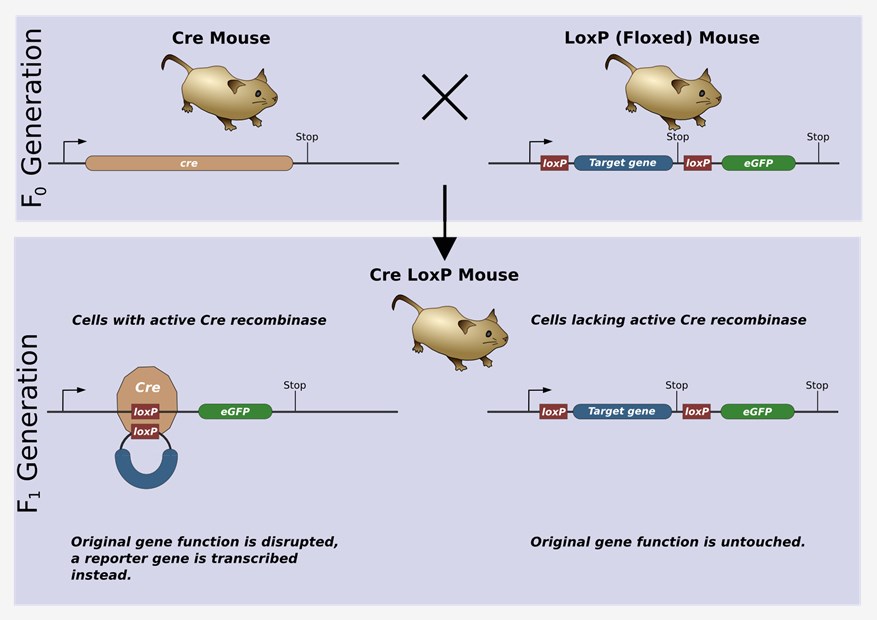 By employing a Cre/loxP recombination system, a special knockout strain, in which the knockout of the NMDA receptor occurs 2-3 weeks postnatal and is only restricted to neurons of the hippocampal CA1 region, has been generated. It has been demonstrated that either LTP at the Schaffer Collaterals-CA1 pathway or spatial learning and memory in these mutant mice is significantly impaired, indicating that the NMDA receptor in the CA1 region plays a crucial role in encoding hippocampal-dependent learning and memory.

According to the essential role of presenilin-1 (PS1) in developmental and adult neurogenesis, the researchers have employed PS1 as a genetic switch for neurogenesis to study the functional consequence of neurogenesis in relation to learning and memory. To this end, they have used a Cre/loxP recombination system to produce forebrain-specific PS1 knockout mice and have found that neurogenesis in the dentate gyrus of PS1 knockout mice is significantly impaired when these mice were subjected to an environmental enrichment, in comparison with their wild-type littermates. Based on this special feature, newly generated neurons in the hippocampus have been found to play a role in old memory clearance.

Creative Biolabs is a leading company in neuroscience. We offer an innovative avenue Genetic Approaches solutions for memory studies in neurosciences studies. If you need, please feel free to contact us for more detailed information.

Thank you for your interest in Memory: Genetic Approaches. Please provide us with your contact information and your local representative will contact you with a customized quote. Where appropriate, they can also assist you with a(n):