Monoamine neurotransmitters include catecholamines and indoleamines. Catecholamines include dopamine (DA), norepinephrine (NA) and adrenaline (Ad). Indoleamine mainly include serotonin, as known as 5-hydroxytryptamine (5-HT). DA was related to psychosis, and serotonin and norepinephrine were related to several neurological diseases including depression and panic disorder.

Monoamines are transmitted along the microtubules or microfilaments in the axons to the nerve endings and stored in the vesicles of the nerve endings. When the action potential reaches the monoamine nerve terminal, it causes the voltage-activated calcium channel opened. The entry of calcium ions activates the calcium sensor, which triggers the release mechanism to cause the vesicles to fuse with the presynaptic membrane, and monoamines are released into the synaptic cleft. Most of them diffused to the postsynaptic membrane and combined with receptors to transmit neurological information and produce biological effects between cells.

Types of monoamine receptors on the postsynaptic membrane:

Sites of Action of Monoamines and Antidepressants

All antidepressants used clinically inhibited the reuptake of monoamines by synapses and inhibited the intra-neuronal metabolism of monoamines or blocking presynaptic inhibitory self-receptors or heteroreceptors to increase the release of monoamine neurons, thereby greatly increasing the availability of synaptic monoamines. Most monoamine receptors were similar to G protein, the activation of G protein opened potassium channels and inhibited membrane adenylate cyclase (AC), resulting in a decrease in c-AMP levels, this reduced the intracellular Ca2+ required for extracellular secretion and increases the reuptake of monoamine oxidase (MAO). Long-term use of different kinds of antidepressants can cause desensitization of these inhibitory receptors, thereby increasing the availability of monoamines in specific areas of the brain. 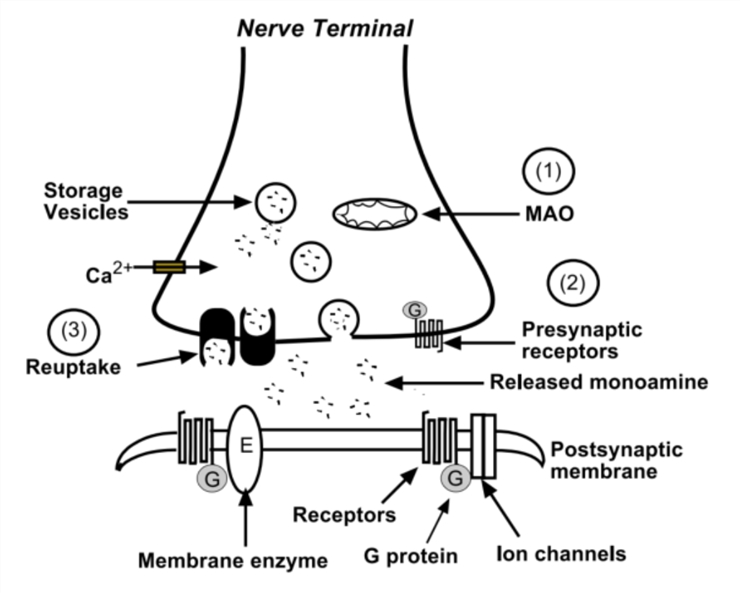 Fig.1 Monoamine neurons and the site of action of antidepressants. (Elhwuegi, 2004)

Positron emission tomography (PET) is a non-invasive imaging technique. These PET probes bind to monoamine receptors, transporters, and other target molecules to assess the release and transmission pathways of monoamine neurotransmitters. PET provides information on various aspects of neurotransmission, such as congenital and postoperative functions, as well as anatomical information. This useful tool reveals the pathophysiological aspects of various mental illnesses, including schizophrenia, and the mechanism of action of psychotropic drugs, because monoamines are the main targets of antipsychotics and antidepressants.

A large amount of evidence supports the main role of NA and 5-HT in depression. All antidepressants in clinical use are aimed at dramatically increasing the availability of monoamines at synapses, serotonin and norepinephrine are the main targets of current depression treatment intervention and drug development. The introduction of PET will provide us with a very important tool to further clarify the precise neurobiological changes that occur after depression and antidepressant treatment.

Creative Biolabs has a team of highly specialized scientists in the field of neuroscience. We have developed a variety of products and advanced technologies for the nervous system. Our serotonin and adrenaline products can significantly increase the availability of synaptic monoamines, it may be your golden key to study synaptic monoamines in central nervous system diseases. Contact us as soon as possible and have your unique solutions and products!

Thank you for your interest in Monoamines: Release Studies. Please provide us with your contact information and your local representative will contact you with a customized quote. Where appropriate, they can also assist you with a(n):