Chemogenetics combines chemical reactions with genetic engineering to control the physiological activities of cells. The most widely used molecules include G protein-coupled receptors (GPCR) and ligand-gated ion channels, which are engineered so that they respond to specific small molecules rather than their endogenous ligands. Because of its controllable and reversible (compounds can be added or removed at any time to start or interrupt specific reactions), it has been widely used in the research of neural signal transduction.

There are many chemogenetics platforms based on GPCRs modification, such as allele-specific activation of genetically encoded receptors, receptors activated solely by synthetic ligands (RASSLs), genetically engineered receptors, and designer receptors exclusively activated by designer drugs (DREADDs). Among them, DREADDs has become the most widely used chemical genetics technology. DREADDs receptors are relatively insensitive to endogenous ligands, but can be activated by clozapine-N-oxide (CNO), which in turn triggers the G protein signaling cascade and leads to various physiological changes. 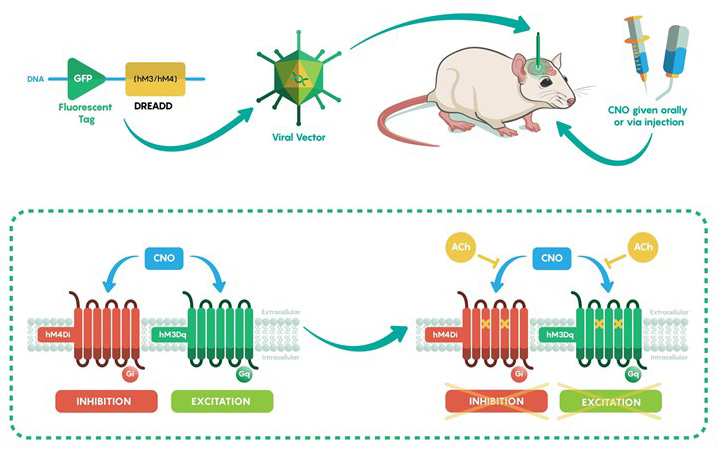 Fig.1 Schematic overview of how different variants of DREADDs (hM3Dq and hM4Di) can be used to activate and also inhibit groups of neurons.

There are many DREADDs activated by azizapine-N-oxide. They will selectively act on different GPCR signaling cascades, including activation of Gq, Gi, Gs, Golf and β -arrestin. The most widely used DREADDs are Gq-DREADD and Gi-DREADD. Below is a list of representative DREADDs. Generally speaking, if you want to activate neurons, choose hM3Dq, and if you want to inhibit neuron activity, choose hM4Di.

How to use chemogenetics virus tools for research:


Please don’t hesitate to contact us for more details.

Thank you for your interest in Chemogenetics Tools. Please provide us with your contact information and your local representative will contact you with a customized quote. Where appropriate, they can also assist you with a(n):