With the deepening of neuroscience research, scientists need to pay attention to many different types of neurons or glial cells, such as a variety of GABAergic interneurons and microglia. Unfortunately, these cells often do not have mature, non-leaking promoters to choose from. Therefore, it is very important to achieve cell type-specific labeling or manipulation. Recombinase systems such as Cre-LoxP or Flp-FRT are ideal tools for labeling specific cell types.

Cre (Cyclization Recombination Enzyme) is a recombination enzyme that was discovered from P1 phage in 1981. Its gene coding region has a total length of 1029 bp and is a 38kDa polypeptide monomer protein composed of 343 amino acids. The C-terminal domain of Cre recombinase contains catalytically active sites, which can catalyze recombination between specific sites in DNA molecules.

To put it simply, this type of recombinase system uses site-specific recombinases (SSRs) to mediate recombination between Recombination tar-get sites (RTs) to achieve specific sites manipulation, such as gene knockout, gene insertion, gene flip, and gene translocation. Since this technology can effectively overcome the shortcomings of non-specificity or low recombination efficiency, it has gradually occupied a dominant position in the field of functional gene research in recent years.

Cre recombinase not only has catalytic activity but is similar to restriction enzymes. It can recognize specific DNA sequences, namely loxP sites so that gene recombination occurs between two loxP sites. Cre recombinase does not require any cofactors, and can act on DNA substrates of various structures, such as linear, circular, and even supercoiled DNA. In addition, the activity of Cre recombinase is controllable, so that it can be expressed only in a certain type of cell type, or it can be triggered by specific external stimuli (such as chemical signals, thermal stimuli). In the field of neuroscience, this technology can be used for specific labeling of neural circuits, functional research of endogenous genes in specific cell types, and construction of mouse models.

According to the way the Cre recombination system induces gene recombination, Cre-dependent gene expression can be achieved through the following two strategies:

In this case, in cells without Cre enzyme, the downstream target gene of the transcription termination signal box is not expressed at all, but if the cell contains Cre enzyme, the deletion process in gene recombination occurs, remove the transcription termination signal box, and then express the purpose gene. This is a simple and effective method. We can selectively (selected according to Cre strains) express genes in certain cells through the setting of LSL. However, the disadvantage of this method is that transcription leakage may occur, that is, the STOP sequence is skipped during transcription, and genes can be expressed without the action of Cre enzyme. 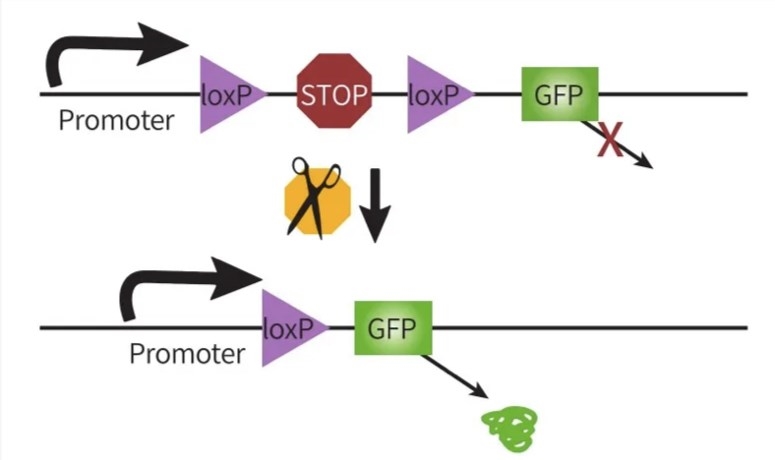 The DIO (Cre-on) or DO (Cre-off) strategy is to introduce two pairs of incompatible reverse Lox sites-LoxP and Lox2272. After two rounds of recombination of the two sets of Lox sites, a stable state can be reached. That is, the expression of genes can be controlled by the presence or absence of Cre recombinase.

Through this strategy, the sequence between any pair of Lox sites will be reversibly quickly flipped under the action of Cre, and then Cre recombinase will immediately irreversibly cut the flipped Lox sites in the same direction, leaving only the flipped Lox sites. Gene and separate LoxP and Lox2272 locus to prevent the gene from being reversed again. This ingenious design allows researchers to construct DIO and reverse genes in viral vectors. After infecting Cre-positive cells, Cre-positive cells can express genes, which is a DIO structure; if the pre-packaged gene is forward, then Cre-positive cells do not express genes, and the rest of the cells express genes, which are in the DO structure. Therefore, the DIO/DO strategy realizes the artificial manipulation of gene expression. 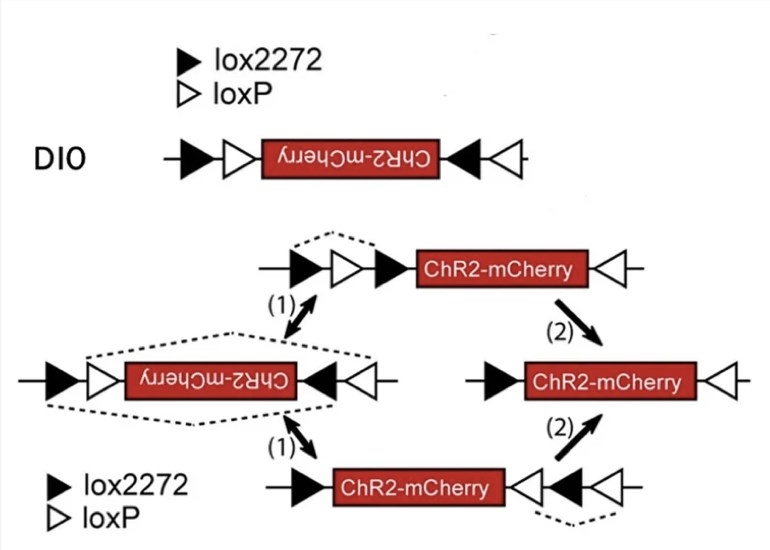 It can be used in combination with Cre strain mice and Cre-dependent expression viral vectors to achieve specific labeling and manipulation of certain cells. When using neural tracing technology to analyze the structure and function of specific neural circuits in the brain, the Cre recombinase system can also be used in combination with AAV serotypes (such as rAAV2/9, rAAV2/retro, rAAV2/1) to achieve specific neural circuit labeling and functional research. 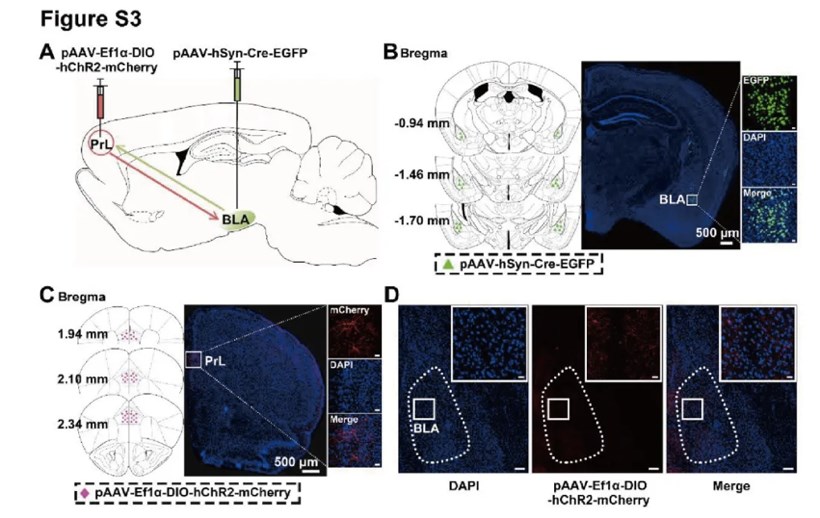 Stronger tissue specificity: Since the virus can be injected locally to ensure region-specific infection, coupled with the specific promoter driving the Cre gene, it can achieve stronger region and cell-specific gene recombination. 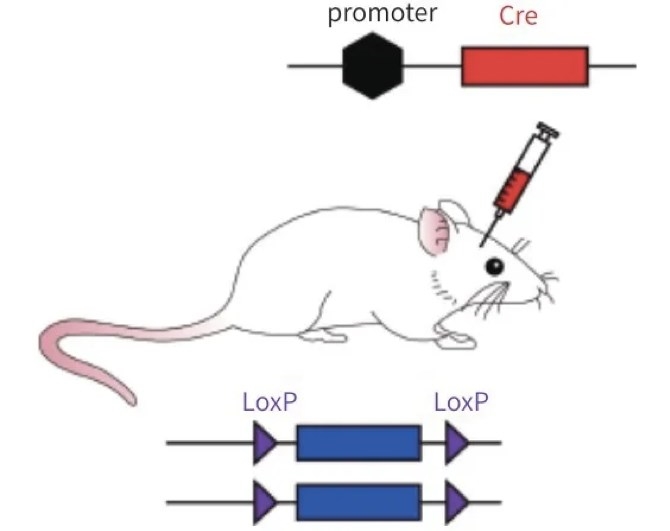 The Cre-loxP system is the most widely used conditional gene knockout tool in the nervous system, mainly due to the following advantages:

High efficiency: After Cre recombinase forms a complex with DNA fragments with loxP sites, it can provide enough ability to initiate the subsequent DNA recombination process. The recombination process is simple and efficient.
High specificity: The loxP site is a 34bp element with a palindrome sequence structure and a gap in the middle. This structure ensures the uniqueness of the loxP sequence, thereby ensuring the strong specificity of gene recombination.
Wide range of applications: Cre recombinase is a relatively stable protein that can play a role in different tissues and different physiological conditions in organisms.
Can be expressed by type 2 promoter: Cre recombinase encoding gene can be driven by any type 2 promoter, thereby ensuring that Cre recombinase can be used in different cells, tissues and organs of the organism, thereby achieving high tissue and cell specificity.

In addition to the Cre-LoxP system, there are similar vCre-vLoxP, sCre-sLoxP systems, and the Flp-FRT/F5 system and Dre-Rox1/Rox2 system that have no cross-effects with the Cre-LoxP system. The corresponding expression schemes are respectively fDIO and dDIO systems. The existence of multiple sets of recombinase systems facilitates the design of multiple constraints in the research, and the flexible application of Cre, Flp, and Dre recombinase systems will facilitate the development of more in-depth topics (Figure 7).

The Flp-FRT system and Cre-loxP induce gene recombination in a similar way. The obvious difference between the two systems is that the recombinase (Cre and Flp) has different optimal reaction temperatures. Studies have found that Cre recombinase is the best The temperature is 37 oC and Flp recombinase is 30℃. 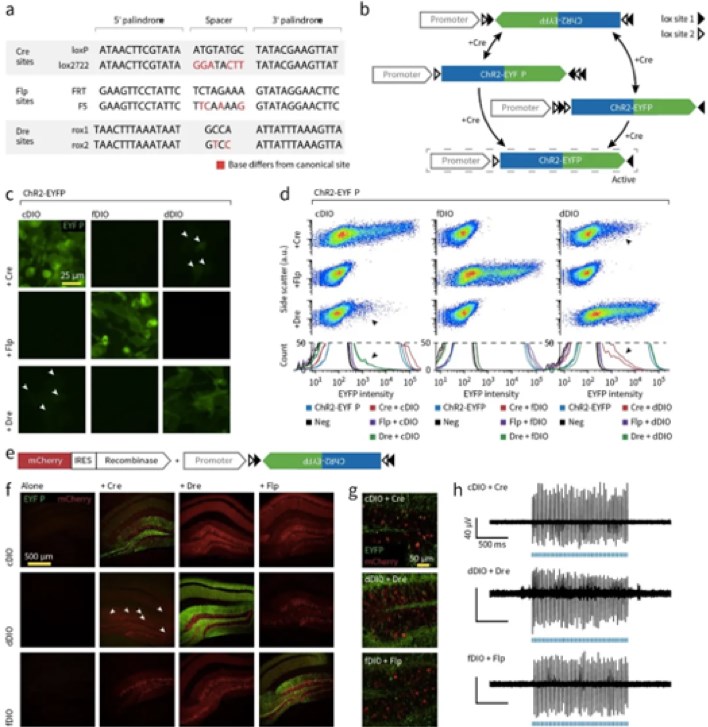 Both vCre and sCre are homologous proteins of Cre recombinase, but they show low homology with Cre and can specifically recognize vloxp and sloxp sites.

Creative Biolabs has been committed to providing one-stop solutions for neuroscience research. Our services range from neural gene labeling, neural tracing tool design, gene manuplation, tracer virus packaging to animal model construction! Please feel free to contact our dedicated technical support team for any further assistance.
For Research Use Only. Not For Clinical Use.
Send Inquiry

Thank you for your interest in How Does Cre, Flp, Dre Recombinase System Work?. Please provide us with your contact information and your local representative will contact you with a customized quote. Where appropriate, they can also assist you with a(n):