Parkinson's disease (PD) is the most common neurodegenerative movement disorder. Pathologically, PD is characterized by the presence of abnormal intra-neuronal aggregates of α-synuclein (SNCA). SNCA is central to the pathogenesis of PD, as is highlighted by the fact that rare SNCA mutations, duplications, or triplications cause autosomal dominant familial PD. The etiology of idiopathic PD is multifactorial, likely arising from a combination of polygenic inheritance, environmental exposures, and gene-environment interactions. The current medical management of PD aims at controlling signs and symptoms as long as possible while minimizing adverse effects. Most of them are targeting at supplementation of dopamine to the brain to alleviate motor dysfunction caused by the degeneration of dopaminergic neurons in the nigrostriatal system.

Numerous potential therapies for PD are at various stages of preclinical and clinical testing. These agents target many aspects of PD pathogenesis. Several basic pathophysiological pathways are depicted in Fig.1, including those that lead to Lewy bodies, and those involving inflammatory factors, mitochondrial dysfunction and oxidative stress. 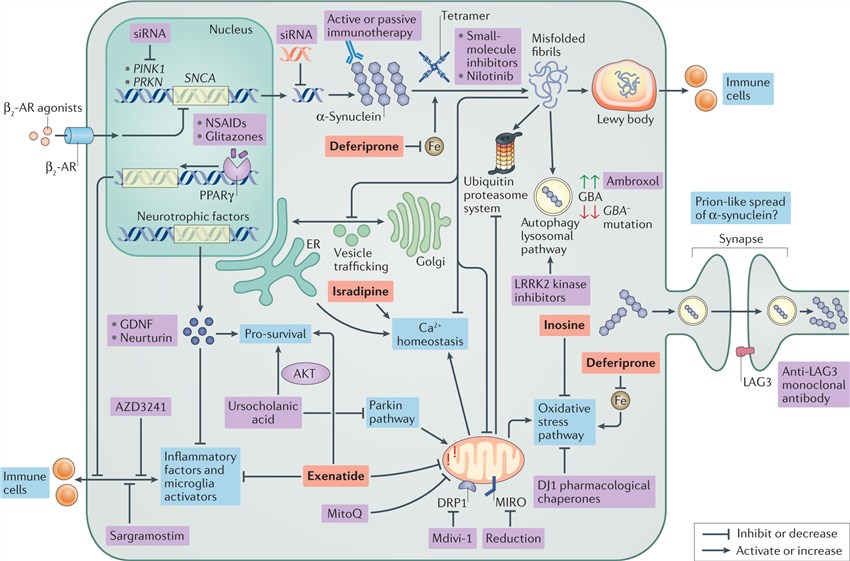 Genetic-based targeted therapies currently being tested in PD patients focus on SNCA, glucocerebrosidase (GBA), and leucine-rich repeat kinase (LRRK2). Multiple lines of evidence support a pivotal role of SNCA in PD pathogenesis. The presence of aggregated α-synuclein in specific brain regions suggests a central role for this protein in sporadic disorder. Heterozygous GBA mutations increase the risk of developing PD and other synucleinopathies. GBA mutations are the most frequent genetic risk factors for PD identified to date, with 7% to 10% of PD patients carrying at least 1 of approximately 300 reported GBA mutations. LRRK2 interacts with many key proteins implicated in PD, suggesting that LRRK2 may be a central player in the pathways underlying disease pathogenesis. The current leading hypothesis shows that increased kinase activity by LRRK2 mutations is responsible for PD. The popular targets in PD researches are listed below:

Thank you for your interest in Parkinson's Disease Related Products. Please provide us with your contact information and your local representative will contact you with a customized quote. Where appropriate, they can also assist you with a(n):