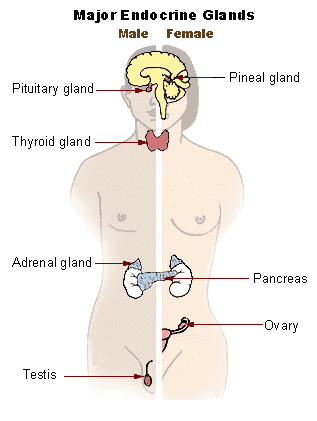 The endocrine glands release hormones into the blood. This allows the hormone to spread to cells in other parts of the body.

The Neuroendocrine System regulates the release of each hormone. This may depend on the level of hormones already in the blood, or the level of other substances in the blood (such as calcium). Many factors affect hormone levels, such as stress, infection, and changes in the water and mineral balance in the blood.

The typical mode of cell signaling in the Neuroendocrine System is endocrine signaling, which uses the circulatory system to reach remote target organs. However, there are other modes, namely paracrine, autocrine and neuroendocrine signaling. On the other hand, the pure neurosecretory signals between neurons belong entirely to the nervous system.

Autocrine—Autocrine signaling is a form of signaling in which a cell secretes a hormone or chemical messenger which binds to an autocrine receptor on the same cell, causing cell changes.

Diseases of the neuroendocrine system are common, including diabetes, thyroid disease, and obesity. Endocrine diseases are characterized by dysregulated hormone release (productive pituitary adenoma), improper response to signals (hypothyroidism), and lack of glands.

Creative Biolabs provides a complete list of antibody and protein products to help our customers better understand the interaction between the neuroendocrine system and the nervous system. Specifically, we provide marker antibodies related to (but not limited to) the following types of signaling pathways:

With our easy-to-use guide below, choose the best marker tools you need for your neuroendocrine system research.

Thank you for your interest in Neuroendocrine System Related Antibodies and Proteins. Please provide us with your contact information and your local representative will contact you with a customized quote. Where appropriate, they can also assist you with a(n):