In the study of the central nervous system, viral vectors are used not only to analyze the function of neural circuits, but also to study diseases or as gene therapy vectors due to their unique gene delivery characteristics and target specificity. Adeno-associated virus (rAAV) vectors and lentivirus (LV) vectors are currently the most used vectors in central nervous system research and gene therapy clinical trials in rodents and primates. 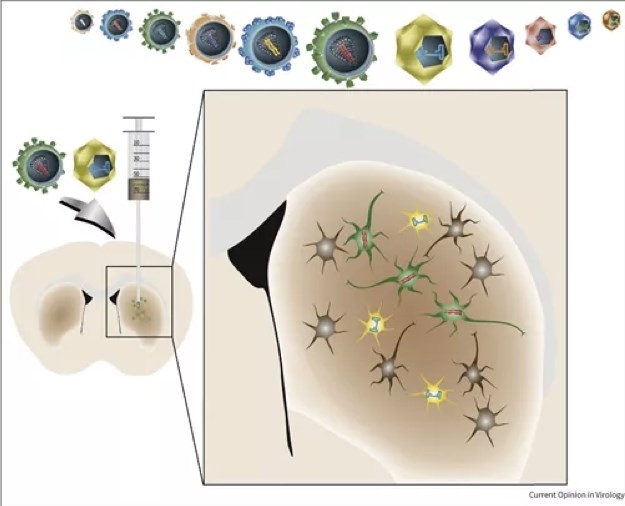 Applications of AAV and LV in Nervous System Research

Viral vectors are widely used in nervous system research. They are commonly used to deliver fluorescent labels, calcium indicators, and physiological manipulation tools to mammalian brains. Such as genetically encoded calcium indicators (GECIs: GCaMP, jRGECO1), genetically encoded voltage indicators (Voltron, GEVIs: SomArchon), neurotransmitter probes (such as DA/Ach/NE/iGABASnFR) and optogenetic/chemical genetic elements (such as ChR2, eNpHR, hM3Dq, hM4Di). The emergence of these new technologies has perfected the technical system of physiological research and helped us better understand the neural mechanisms of behavior at the level of neurons and neural circuits.

The following summarizes the techniques used in neuroscience research.

With the deepening of research, modern neuroscience needs to pay attention to many different types of neurons or glial cells, such as a variety of GABAergic interneurons and microglia. Unfortunately, these cells often don't have mature, non-leaky promoters to choose from. In this case, recombinase systems such as Cre-LoxP or Flp-FRT are ideal tools to achieve cell-type-specific labeling and manipulation.

This recombinase system uses site-specific recombinases (SSRs) to mediate recombination between recombination target sites (RTs) to achieve specific sites engineering, such as gene knockout, gene insertion, gene flip and gene translocation. Since this technology can effectively overcome the shortcomings of other types of recombination technologies such as non-specificity or low recombination efficiency, it has gradually occupied a dominant position in the field of functional gene research in recent years.

Optogenetics is a technology that combines optics and genetics. With optogenetic tools, we can precisely control the activity of specific types of neurons in the brain, spinal cord, and peripheral nerves of living animals, even free-moving animals. The accuracy of optogenetics in time can reach the level of milliseconds, and the accuracy in space can reach the level of individual cells.

The emergence of optogenetics technology can help researchers to better understand the neural mechanism between the brain and behavior. At present, the application of optogenetics is mainly concentrated in rodent small animal models. To maximize the potential of optogenetics and make it an important tool for the study of human cognition and behavior, however, it is prudent to start with non-human primates (non-human primates) to prove their safety and effectiveness. Using optogenetics to analyze the neural mechanisms at the cellular level, circuit level and brain network level of NHPs is expected to reveal the basic mechanisms of human brain functions and disorders.

The DREADDs technology was invented by Bryan L. Roth and others. They changed the structure of the G protein-coupled receptor-acetylcholine receptor. After the change, it can only be activated or inhibited by the specific compound Clozapine-N-oxide (CNO). Such altered receptors will selectively act on different GPCR cascades, of which the most widely used are Gq-DREADD and Gi-DREADD.

Gi-DREADD and hM4Di: Gi-coupled GPCRs can activate the G protein inward rectifier potassium channel (GIRK). Under the action of CNO, hM4Di receptors can be activated to inhibit neuronal discharge activity. Studies have also shown that hM4Di can inhibit the release of neurotransmission, to achieve the effect of inhibiting neuronal activity.

The key to brain science research is to realize the real-time observation of the activity of neuron clusters, and to analyze the function and structure of neural circuits on the whole brain scale through the structure tracking of specific neural circuits and their activity manipulation.

Creative Biolabs has been committed to providing one-stop solutions for neuroscience research. Our services range from neural gene labeling, neural tracing tool design, gene manuplation, tracer virus packaging and animal model construction!
For Research Use Only. Not For Clinical Use.
Send Inquiry

Thank you for your interest in Neural Circuit Function Research Technology. Please provide us with your contact information and your local representative will contact you with a customized quote. Where appropriate, they can also assist you with a(n):