Neural crest cells (NCCs) are the pluripotent stem cells unique to vertebrates and produced by embryonic ectoderm germ layers, which can differentiate into different cell types (such as melanocytes, peripheral and enteric neurons and glial cells) and give rise to multiple tissues and organs (include craniofacial cartilage and bones, smooth muscle). The emergence of neural crest is important in the evolution of vertebrates because many of its structural derivatives are characteristic of the vertebrate clade. Because of its contribution to a variety of cell lineages, understanding the molecular mechanism of neural crest formation is very important for researchers to understand human diseases. Studies have shown that abnormal neural crest development can cause neuro spinal neuropathy, including frontal nose dysplasia, Waardenburg-Shah syndrome and DiGeorge syndrome. 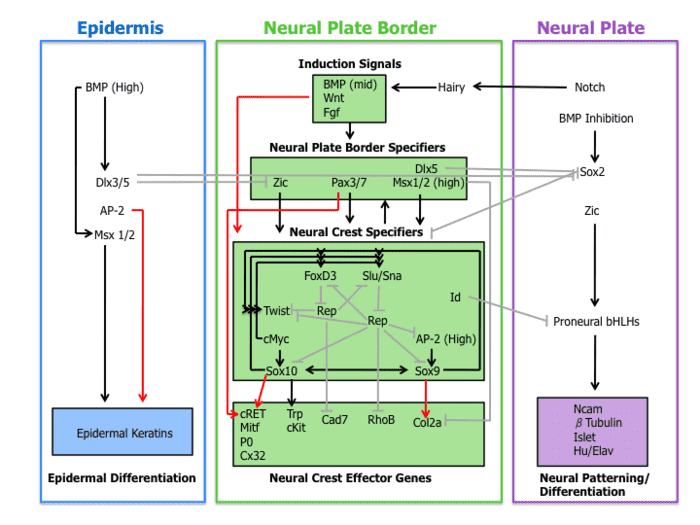 Neural crest cells have been shown to be associated with multiple neurocristopathies which result from the abnormal specification, migration, differentiation or death of neural crest cells throughout embryonic development. This group of diseases includes various congenital malformations that affect many newborns. In addition, their appearance is due to genetic defects that affect the formation of neural crest and the action of teratogens.

Waardenburg's Syndrome - Waardenburg's syndrome is a neurocristopathy that results from defective neural crest cell migration. The main characteristics of this condition include piebaldism and congenital deafness. The piebaldism is caused by a total absence of neural crest-derived pigment-producing melanocytes.

DiGeorge Syndrome - The symptoms of DiGeorge syndrome include congenital heart defects, facial defects, and some neurological and learning disabilities.

Please browse the options below to take a deeper look at the tools you need for your research.

Thank you for your interest in Neural Crest Stem Cell Markers Related Products. Please provide us with your contact information and your local representative will contact you with a customized quote. Where appropriate, they can also assist you with a(n):