Glutathione Metabolism in Glia and Neurons

Glutathione Metabolism in Glia and Neurons

Reactive oxygen species (ROS), produced continuously during oxidative metabolism, are generated at high rates within the brain. The human brain cells utilize 20% of the oxygen consumed by the body but constitute only 2% of the body weight. In the brain, there is a large quantity of ROS generated during oxidative phosphorylation. Compared to other organs, the brain appears to be in an unfavorable position regarding generation and ROS detoxification. Therefore, one of the essential tasks within the brain is the defense against the toxic effects of ROS. The involvement of the antioxidant glutathione (GSH) in this process is very important. GSH is involved in the disposal of peroxides by brain cells and the protection against reactive oxygen species.

GSH is a tripeptide and present in most cell types, including astrocytes. GSH has some important physiological functions. For example, Cellular detoxification of ROS need for GSH. Besides intracellular functions, GSH also has important extracellular functions in the brain. In addition, to its chemical reaction with radicals and electrophiles, GSH serves as a substrate or cofactor of many detoxifying cellular enzymes. Furthermore, it can act as an antioxidant, a modulator of glutamatergic signaling, and a cysteine transport form. 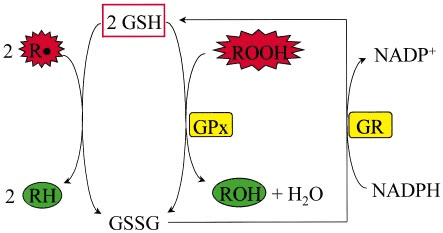 In general, the GSH tripeptide is synthesized as the product by two ATP-consuming cytosolic enzymes. In the first step of GSH synthesis, g-Glutamylcysteine (gGluCys) synthetase uses glutamate and cysteine as substrates and forms the dipeptide gGluCys. In the second step of GSH synthesis, L-γ-glutamylcysteine and ATP combine to form L-γ-glutamyl-cysteinyl phosphate, which is combined with glycine in a reaction catalyzed by GSH synthase to form GSH. The synthesis of GSH depends on the intracellular availability of the substrates. This synthesis could occur in both neurons and glial cells, although astrocytes synthesize GSH more effectively than neurons because of their ability to utilize a wider variety of precursor substrates.

During detoxification of ROS, GSH is involved in two types of reactions: (i) GSH reacts with radicals such as the superoxide radical anion, nitric oxide, or the hydroxyl radical, and (ii) GSH is the electron donor for the reduction of peroxides in the GSH peroxidases (GPx) reaction. The product of GSH oxidation is GSH disulfide (GSSG), and GPx catalyzes this reaction. GSH is regenerated from GSSG by the GSH reductase (GR) reaction within cells. In contrast, through the formation of GSH S-conjugates by GSH S-transferases (GSTs), enzymes present in the brain, and by the export of GSH or GSSG from cells, the level of total intracellular GSH is lowered. Such processes also participate in the consumption of GSH in brain cells. 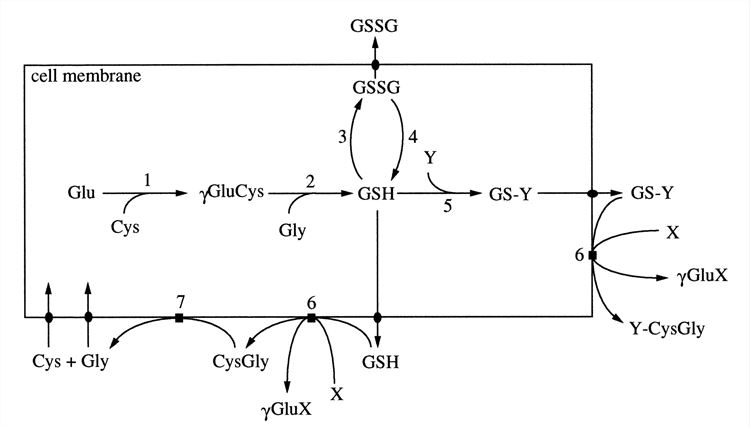 Metabolic cooperation between astrocytes and neurons is much important for the homeostasis of GSH in the brain. In the brain, especially neurons appear to be disadvantaged regarding GSH metabolism. GSH synthesis in neurons relies on extracellular cysteine and cannot use the cysteine-oxidation product cystine as a GSH precursor. However, astrocytes can utilize a far greater number of other amino acids, metabolites, or peptides as precursors of the GSH synthesis substrates glutamate, cysteine, or glycine. Thus, astrocytes have a pivotal role in the brain as partners of neurons in homeostatic and metabolic processes. 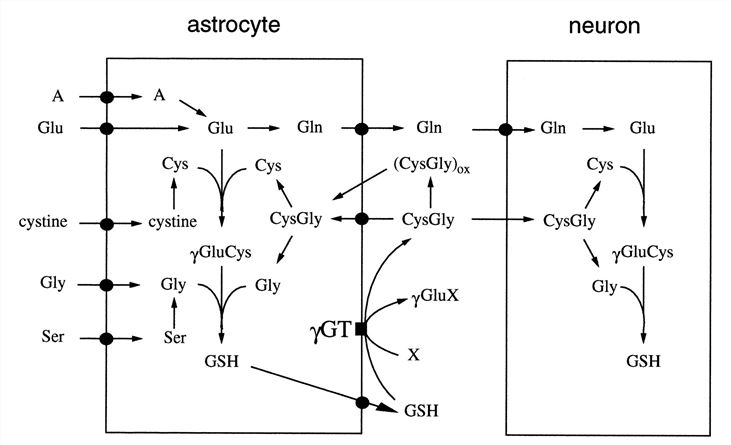 Fig.3 Scheme of the proposed metabolic interaction between astrocytes and neurons in GSH metabolism. (Dringen, 2000)

Insufficient antioxidative defense or increased generation of ROS can cause oxidative stress. For the brain, oxidative stress has related to the loss of neurons during the progression of neurological diseases, e.g., Parkinson’s disease (PD), Alzheimer’s disease, schizophrenia, Huntington’s disease, and stroke. Thus, impairments in GSH-dependent detoxification processes in astrocytes and neurons are likely to contribute to disturbances in brain GSH homeostasis as well as to neural damage.

For example, the best evidence for a disturbed GSH metabolism in the brain as the factor leading to the pathogenesis of a disease has been reported for PD. The observation that certain GSTs are expressed in brain regions affected in Parkinson’s disease and change expression in PD models. Because GSTs are modulated by several actions that induce oxidative stress, measurement of this class of proteins may allow the identification of individuals in which this process is aberrant. Many different therapeutical treatments for PD have been under investigation. Since a compromised GSH system appears to be an early event during the pathogenesis of PD, improvement of either GSH levels or activities of enzymes involved in GSH metabolism has been considered treatment strategies.

As a global pioneer leader in neurosciences, Creative Biolabs is professional in applying a series of leading technologies and products for our customers worldwide. If you want to know more about our services and products, please do not hesitate to contact us for more detailed information.

Thank you for your interest in Glutathione Metabolism in Glia and Neurons. Please provide us with your contact information and your local representative will contact you with a customized quote. Where appropriate, they can also assist you with a(n):