Nitric oxide (NO) is a free radical signaling molecule with remarkably complex biochemistry. Its involvement in multiple sclerosis (MS) had been postulated soon after the discovery of the critical role NO plays in inflammation. With a comprehensive assay platform, Creative Biolabs provides an accurate, convenient measure of total nitrate/nitrite in a simple process, 1) converting nitrate to nitrite utilizing nitrate reductase and 2) using Griess Reagents to convert nitrite to a deep purple azo compound.

MS is the most common demyelinating disease of the central nervous system (CNS). MS is characterized by a chronic inflammatory process resulting in oligodendrocyte and axonal damage and eventual neuronal loss. NO, a versatile signaling molecule, was implicated in the inflammatory process and the potential contribution of NO to the development of MS has been extensively tested in human and animal models. 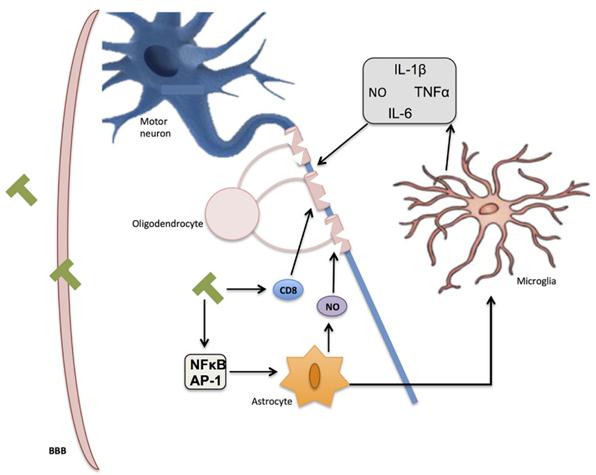 The level of NO production correlates with disease activity in various inflammatory disorders in which the amount of NO is proportional to the extent of the inflammatory processes and the severity of the disease. NO is synthesized by nitric oxide synthase (NOS) which oxidizes guanidine nitrogen of L-arginine releasing nitric oxide in the form of a free radical and citrulline. Three isoforms of the NOS have been identified: neuronal (nNOS or NOS-1), inducible (iNOS, NOS-2), and endothelial (eNOS, NOS-3) isoforms. Since the iNOS isoform is the high-output producer of NO and its role in inflammation had been well established, the focus of studies on the potential role of NO in MS was directed towards the iNOS isoform.

Generally, the concentrations of markers of NO production (such as nitrate and nitrite) are raised in the cerebrospinal fluid (CSF), blood, and urine of patients with MS. Creative Biolabs provides NO production assay service for worldwide clients for the quantitative determination of NO (nitrate/nitrite) and evaluation of drug effects on its metabolism.

Nowadays, direct and automation-ready procedures for measuring NO are becoming popular in research and drug discovery. Since NO is oxidized to nitrite and nitrate, it is common practice to quantitate total NO2-/NO3- as a measure of NO level. Many commercial kits are designed to accurately measure NO production following the reduction of nitrate to nitrite using the improved Griess method. The procedure is simple and the time required for sample pretreatment and assay is reduced to as short as 30 min.

Abundant evidence points to an important role of NO in the pathogenesis of MS and to its contribution to the various facets of the disorder such as inflammation, changes in synaptic transmission, and neuronal death. If you are interested in the assay, please feel free to contact us for more information.

Thank you for your interest in Nitric Oxide Production Assay. Please provide us with your contact information and your local representative will contact you with a customized quote. Where appropriate, they can also assist you with a(n):