Measuring the precise dynamics of specific neurotransmitters and neuromodulators in the brain is essential for understanding their regulation and activity at the molecular, cellular, and circuit levels. However, due to the complex nature of the central nervous system in terms of its anatomical and chemical characteristics, tracking specific neurotransmitters with high precision is extremely challenging.A general detection method would need to cover the entire spectrum of chemically diverse transmitters while still retaining the specific ability to distinguish between different transmitters.

Thanks to the development and optimization of various genetically encoded sensors in recent decades, several pioneering research tools with high cell specificity and good signal-to-noise ratio have been developed. At Creative Biolabs, we are approaching the stage of designing various tools to perceive the various characteristics of neurotransmission. These tools were reported very sensitive and specific detection for neurotransmitters and very suitable for tracking the precise dynamics of neurotransmitters and neuromodulators. Specifically, we provide multiple neurotransmitters imaging tools including genetically-encoded fluorescent sensors (e.g. PBP-based sensors, GPCR-activation Based (GRAB) Sensors), enzyme sensors and electrochemical sensors for ACh, DA, 5HT, EP, NE and GABA detection in preclinical clinical samples.

Design of Biosensors for neurotransmitter 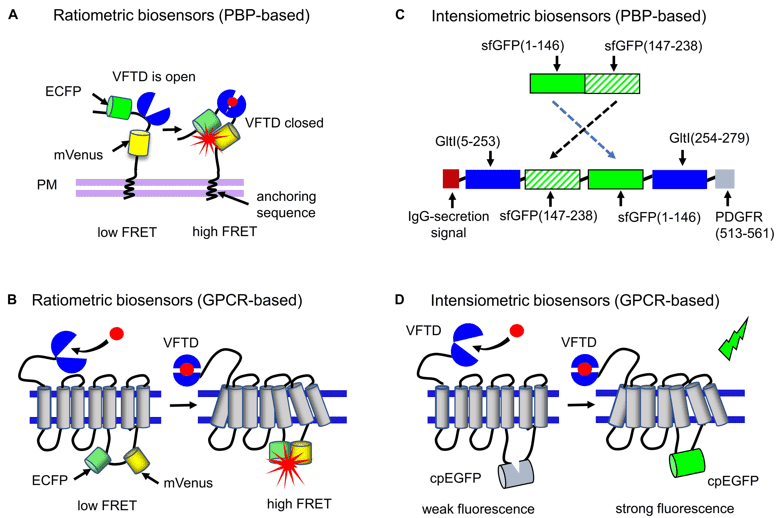 Thank you for your interest in Neurotransmitter Sensors. Please provide us with your contact information and your local representative will contact you with a customized quote. Where appropriate, they can also assist you with a(n):