As one of the fundamental homeostasis in cell biology, the maintenance of cell volume in a certain range is associated with many important cell behaviors and functions, differentiation, and apoptosis. For instance, suspension cells with larger cell volume exhibit a higher growth rate. Swelling of cells and rapid initial intracellular acidification accompany the cell migration process, where the suppression of cell volume increased by precluding ion movement across cell membranes leads to inhibition of neutrophil migration. Disorder of cell volume homeostasis has also been reported to be associated with the pathogenesis and progression of several diseases, for example, cardiovascular disease, neurological disease, and chronic hepatitis. 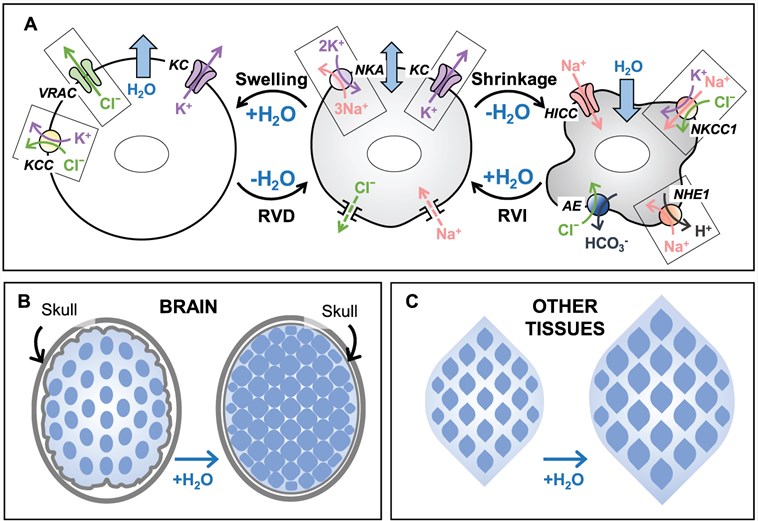 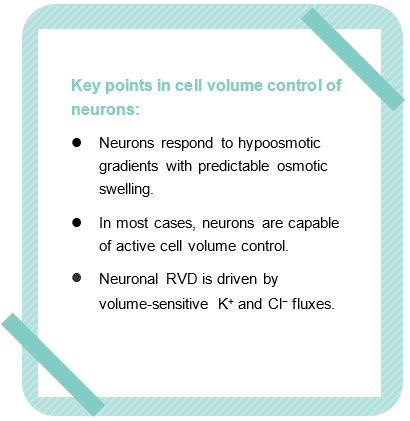 Neurons have an elaborate morphology that the distant parts of the cell are likely to experience “local” hydration gradients and require “decentralized” mechanisms of cell volume control. Neuronal hyperexcitation is associated with significant fluxes of ions and water. Dendrites, which are endowed with a high density of postsynaptic ionotropic receptors, have an especially high propensity to swell. This phenomenon is known as dendritic beading or the formation of synaptic varicosities, which is particularly pronounced under pathological conditions. The initial observations of neuronal swelling and regulatory volume decrease (RVD) have been reproduced in many neuronal cell types, including acutely isolated peripheral sympathetic neurons, cerebellar granular cells, cultured cortical neurons, and the neuroblastoma N1E-115 cell line.

Neuronal processes are capable of “local” volume control. For instance, swollen synaptosomes (isolated presynaptic nerve endings) completely recover their volume within 2 minutes after exposure to hypoosmotic media. Within the same time frame, swollen synaptosomes strongly upregulate their Ca2+ uptake via activation of unidentified cation channels. Hypoosmolarity-induced Ca2+ influx may explain the swelling-induced exocytosis of neurotransmitters; however, other mechanisms of release have also been suggested. In cortical neurons, acute exposure to glutamate or NMDA causes rapid (within 10 min), swelling of their somata and formation of dendritic varicosities. For both compartments, this process is completely [Na+]-dependent but also inhibited by non-selective volume-regulated anion channel (VRAC) blockers. Once NMDA-receptor agonists are removed, swelling of the cell body and dendritic varicosities is resolved within 20-60 min, and the latter volume recovery is also sensitive to VRAC inhibitors. These data suggest that in neuronal processes, VRAC contributes to both cellular swelling and compensatory RVD during and after treatment with excitotoxins. Collectively, studies in synaptosomes and neuronal cultures suggest that in neuronal cells, cell volume-sensitive ion channels are distributed throughout their distal cell processes, in both the dendritic and the axonal compartments, and mediate cell volume control. The Cl− movement in local volume control appears to be largely mediated by VRAC.

With a comprehensive technology platform and advanced facilities, Creative Biolabs can offer high-quality neuro-based services and products. If you are working on neuro research, or you need any assistance in this field, please don’t hesitate to contact us for more information.

Thank you for your interest in Cell Volume Regulation of Neurons. Please provide us with your contact information and your local representative will contact you with a customized quote. Where appropriate, they can also assist you with a(n):