The formation of new synapses occurs throughout the lifetime of an organism but is particularly prominent during the early development of the nervous system. During the initial phase of synapse formation, presynaptic and postsynaptic membranes must be identified and matched, and initial contact has to be formed and stabilized. Recent work has shown that neurons use a rather diverse set of membrane proteins and pathways to guide and control the initiation of synapse formation. These transmembrane proteins are members of the large group of cell adhesion molecules (CAMs), which includes different subclasses, the most important of which are: synaptic cell adhesion molecules (SynCAMs) as a subgroup of the immunoglobulin superfamily CAMs; cadherins, and other structurally unrelated proteins, such as teneurins; epidermal growth factor (EGF) repeat-containing transmembrane proteins; the neurexin neuroligin pairs; the leucine-rich-repeat transmembrane neuronal protein family; and Eph ephrins. Many of these early synaptogenic proteins have additional roles in axon branching and pathfinding.

Given the conserved nature of presynaptic scaffold core components, the diversity of factors initiating the timing and location of synapse assembly is surprising. However, it should be considered that the evolution of the actual synaptic machinery predated many aspects of neuronal diversification. Thus, the assembly of the active zone core scaffold had to be integrated into the context of the new circuits and neuron types that were evolving. Moreover, during the establishment of principal connectivity, axons and dendrites often meet in a crowded environment where delicate choices of which axon type forms synapses to which dendrite class must be made. One presynaptic neuron could even form different synapse types with different postsynaptic target cells. Thus, locally secreted presynaptic molecules might instruct the formation of the proper synapse types. Interestingly, self-avoidance organized by an enormous diversity of splice isoforms of cell adhesion proteins, such as DSCAMs (Down syndrome cell adhesion molecules), which have been particularly well-described in Drosophila, and protocadherins in rodents also seems important here. More than 38,000 isoforms of DSCAMs are expressed in Drosophila due to extensive combinatorial alternative splicing. Their composition on the cell surfaces confers a unique genetic identity to a given neuronal cell. Self-avoidance of the axon and dendrite of the same neuron is achieved by contact-mediated repulsion, initiated by homophilic binding of identical DSCAMs on the neuron’s surface. Whether the sets of presynaptic and postsynaptic transmembrane interacting proteins are usually similar is an interesting question. 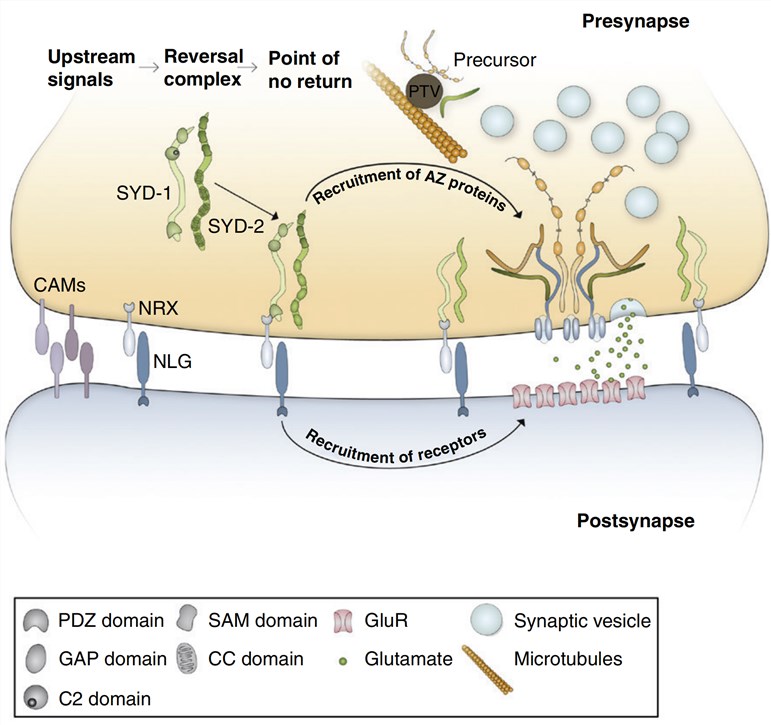 Following the establishment of transsynaptic contact and communication, active zone scaffold material then has to accumulate at putative sites of synaptogenesis. Currently, comparatively little is known about the transport of active zone precursor material (and components of the release machinery, including Ca2+ channels) along the axon and how these feeds into the active zone assembly process. At Drosophila and C. elegans neuromuscular synapses, SYD-1 and SYD-2/liprin-a accumulate are important for the early scaffold assembly. Both proteins, therefore, are found in common complexes, which are not necessarily stable but at least at synapses of the Drosophila neuromuscular junction depend on the direct binding of SYD-1 to the carboxyl terminus of neurexin. Clustering of neurexin, in turn, instructs postsynaptic neuroligin to trigger the assembly of the postsynaptic density scaffold. In summary, cytoplasmic scaffold assembly and transsynaptic signaling appear to be mutually dependent and concomitant. They might collectively establish a checkpoint for the maturation of initial, unstable assemblies into stable synapses. Effective oligomerization of SYD-2/liprin-a via its amino-terminal coiled-coil domains after overcoming an intramolecular blockade executed by the carboxy-terminal SAM domains is a candidate process for driving the early scaffold through this critical phase. Cooperative sensing of cytoplasmic and transsynaptic machinery might serve as a safety mechanism, for example, blocking precocious or truly erratic assembly.

Despite the chance of an ultimately convergent understanding of mesoscale (40-100 nm) synapse architectures among species, there are also obvious differences in the molecular function of synapse assembly components. Mammalian mSYD1A, for example, structurally lacks the PDZ domain conserved within the carboxy-terminal regions of C. elegans and Drosophila SYD1 which bind to neurexin. However, mSYD1A function critically depends on an amino-terminal intrinsically disordered domain, which interacts with NSEC1/MUNC18-1, a soluble protein that is essential for synaptic transmission and operates via the SNARE complex. In contrast to invertebrates, mSYD1A knockout mice have normal active zone numbers, while the synaptic transmission is impaired due to a reduced number of docked synaptic vesicles at the active zone. That said, a second Syd locus is present in mammals, and double knockout analysis will ultimately be needed to reveal its function.

As an industry-leading neuro-research-based services and products provider, Creative Biolabs has a comprehensive service system and strong foundations with advanced technologies. We have successfully provided hundreds of customer-satisfied projects. Customer satisfaction is all our aim.

If you are interested in neuro research and need assistance, or you have any other questions about our services, please don’t hesitate to contact us for more information.

Thank you for your interest in Synaptogenesis. Please provide us with your contact information and your local representative will contact you with a customized quote. Where appropriate, they can also assist you with a(n):