Overview of Secretion and Vesicle Re-cycling of Neurons 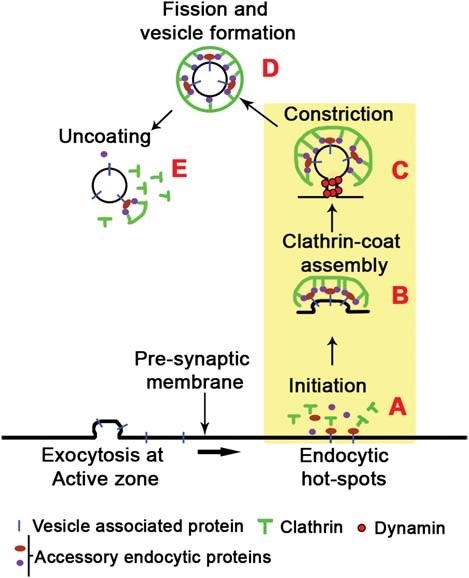 Our view of synapse organization has evolved during the past couple of decades from that of a hard-wired element built for fast electrochemical transmission to that of a multiscale dynamic organelle whose function is intimately linked to the movement of its components in space and time. Hence, neuronal communication must be seen as a dynamic process derived from the integration of the movement of synaptic elements at the intramolecular, intermolecular, and subcellular scales.

Nerve-terminal function comprises two long-known and complementary mechanisms: the transmitter is released via quantal exocytosis upon entry of Ca2+, and the spent vesicles undergo compensatory endocytosis to restore the status quo. With the arrival of the action potential, extrasynaptic Ca2+ flows into the nerve terminals and triggers soluble N-ethylmaleimide-sensitive factor attachment protein receptor (SNARE) protein-dependent vesicle exocytosis. After exocytosis, the fused synaptic vesicle (SV) components are locally recovered from the surface of neurons through endocytosis, which is closely combined with exocytosis. The maintenance of chemical synaptic transmission relies upon the availability of release-competent small clear-cored synaptic vesicles that are filled with a high concentration of neurotransmitters. In the central nervous system (CNS), typical synaptic terminals have only in the order of ~102 vesicles per active zone, yet neuronal activity in functional circuits often requires sustained action potential firing in the range of 10-100 Hz. The fidelity of circuit function, therefore, relies on both the actual rates of vesicle use and of recycling at each synapse, in addition to the fact that information flow is distributed across many nerve terminals.

The plasticity of mature synapses is a hallmark of learning and memory. It must comply with the paradoxical long-term stability necessary to store memories and high dynamics necessary for their fast encoding. Synapses maintain global stability while their components are in a dynamic equilibrium between subcellular compartments, hence shifting the concept of stability toward metastability. Activity-, development-, or environment-dependent changes in the efficacy of synaptic transmission are related to the modification of both synapse composition and biophysical properties of their individual elements. At the presynaptic level, modifications in the properties of neurotransmitter release mostly underlie plasticity. Mechanisms involve modifications of pre-existing elements of the release machinery as well as relocalization of modulatory elements such as calcium channels or metabotropic receptors. It is, however, at the postsynaptic level that dynamics of synaptic components have been best demonstrated to account for synaptic plasticity. Numerous examples have been provided in which diffusion-trap processes or their regulation underlies short- or long-term modification of synapse efficacy. These include reversible binding between receptors and scaffold elements, oligomerization between various synaptic components, and posttranslational modifications of these same elements, leading to changes in diffusion-reaction (phosphorylation/dephosphorylation, ubiquitination, etc.).

Similarly, the plasticity of inhibitory synapses involves regulation of the traffic of GABA(A)Rs or GlyRs by activity-dependent and cell-type-specific changes in exocytosis, endocytic recycling, diffusion dynamics, and degradation of receptors. As for the glutamate receptors, these regulatory mechanisms involve receptor-interacting proteins, scaffold proteins, synaptic adhesion proteins, and enzymes. For example, neuronal activity modifies diffusion properties of GABA(A)Rs in cultured hippocampal neurons. Enhanced excitatory synaptic activity induces a loss of GABA(A)Rs from synapses and concomitant reduction in GABAergic mIPSC through increased surface mobility depending on Ca2+ influx and calcineurin activity. Gephyrin dispersal is not essential for this GABA(A)R declustering. Altogether, this indicates that GABA(A)Rs diffusion dynamics are directly linked to rapid and plastic modifications of inhibitory synaptic transmission in response to changes in intracellular Ca2+ concentration triggered during high-frequency excitatory stimulation. Thus, long-term depression (LTD) of unitary IPSCs is tightly linked to stimulation-induced long-term potentiation (LTP) of excitatory synapses through regulation of GABA(A)R diffusion trapping, i.e., GABA(A)R-gephyrin interaction.

Click on the links below to understand more details about secretion and vesicle re-cycling of neurons:

Focusing on neuro research over years, Creative Biolabs has accumulated rich experience and optimized our platform with advanced technologies and facilities. If you are looking for assistance with neuro research, or you have any other questions about our services, please feel free to contact us for more information.

Thank you for your interest in Secretion and Vesicle Re-cycling. Please provide us with your contact information and your local representative will contact you with a customized quote. Where appropriate, they can also assist you with a(n):