DBS is the therapeutic use of chronic electrical stimulation of the brain via an implanted electrode. The most used DBS system uses a four-contact stimulating electrode stereotactically implanted in the target and connected via a subcutaneous wire to a pacemaker-like unit called an implantable pulse generator (IPG) that is placed on the chest wall underneath the collarbone. Electrodes are typically placed bilaterally, although clinical needs sometimes dictate unilateral stimulation. Most targets are deep brain structures rather than cortical areas. DBS has the potential to provide substantial benefits for various neurologic and neuropsychiatric diseases.

The therapeutic effects of DBS involve a variety of mechanisms. The electrode stimulation placed in the nuclear area will affect several neuronal components, including cell bodies, axons, and fibers of passage, and produce an inhibitory synaptic effect on the cells. Through its electrical, chemical, and other neural network effects, the therapy regulates the pathological network’s activities except for local neuronal cell bodies and axons, whether monosynaptic or polysynaptic. DBS changes the firing rate and pattern of single neurons in the basal ganglia and eliminates abnormal rhythmic oscillation between the cortex and the basal ganglia. The electrical current also acts on synapses and triggers adjacent astrocytes to release a wave of calcium, promoting the local release of neurotransmitters from excitatory efferent neurons. In addition, this intervention increases cerebral blood flow and stimulates neurogenesis. 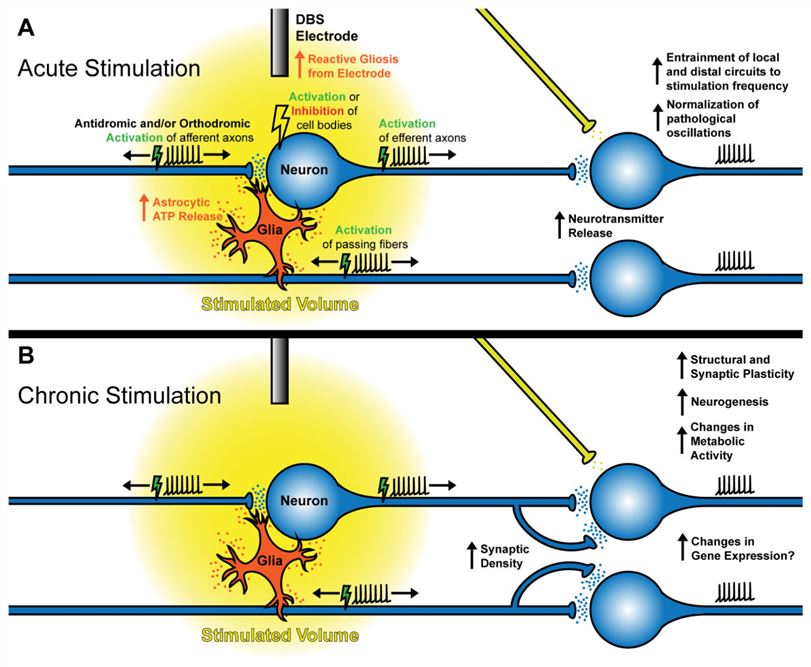 DBS is an effective treatment strategy for a wide range of neurological conditions, such as Parkinson's disease, essential tremor, and dystonia.

Different sites of stimulation provide different clinical effects in Parkinson's disease. Stimulation of the GPi may reduce all the major motor manifestations of Parkinson's disease, including the reduction of dopa-induced dyskinesias, involuntary movements produced by individual doses of dopaminergic medications that can limit treatment efficacy. GPi stimulation also may reduce painful cramps and sensory symptoms that may occur when the benefit from individual doses of levodopa abates. Several studies indicate that bilateral STN DBS improves gait, tremor, and bradykinesia and permits the reduction of dopaminergic medications leading to fewer drug-induced adverse events.

Essential tremor was the first movement disorder indication for which DBS was approved in 1997, and after its efficacy was proved in numerous studies, it has become a routine treatment. DBS remains the procedure of choice for bilateral procedures owing to the increased safety that accompanies the adjustability of the stimulation-something that lesional surgery does not offer.

Early reports of DBS for dystonia involved the thalamus and the globus pallidus internal segment. With the increasing success of pallidotomy for generalized dystonia caused by the DYT1 mutation, the globus pallidus became the primary target for primary dystonia, but the thalamic target is still used. In a recent controlled trial of pallidal DBS in 22 patients with primary generalized dystonia, there was a 30%-50% improvement in symptoms.

DBS is a powerful tool for the treatment of brain diseases and the study of their potential pathophysiology. By measuring all aspects of network activity, stimulation can be adjusted to understand the underlying pathophysiology of neurological disorders and the therapeutic mechanism of DBS.

Creative Biolabs has a very strong technical force in the field of neuroscience research, focusing on DBS research. We can help you better study the targets of DBS in brain diseases and reveal the basic mechanism of abnormal human brain function, making the biggest breakthrough in your project. Contact us for more information.

Thank you for your interest in Deep Brain Stimulation. Please provide us with your contact information and your local representative will contact you with a customized quote. Where appropriate, they can also assist you with a(n):