Electrophysiology is a branch of physiology that studies the electrical characteristics of biological cells and tissues. It involves measurements of voltage changes or electric current, or the operation on various scales from single ion channel proteins to whole organs like the heart. In neuroscience, it involves measurements of the electrical activity of neurons, especially action potential activity. Recordings of large-scale electric signals from the nervous system, such as electroencephalography, may also be called electrophysiological recordings. They are useful for electrodiagnosis and monitoring.

The in vitro electrophysiological method is a useful technique that is amenable to a variety of different tissues and cell configurations and are capable of assessing minute changes in ion channel activity from the level of individual receptors to complex neuronal networks.

In vitro electrophysiological techniques in CNS studies exploit ionic conductance of ion channels and transient modulation of the membrane potential of a neuron.

The most commonly employed in vitro electrophysiological technique is the patch-clamp method. This method requires the initial formation of a giga-ohm seal between the plasma membrane and the blunt tip of a heat-polished glass or quartz micropipette. This “cell-attached” configuration is a stable non-invasive technique. This configuration maintains the integrity of the plasma membrane preventing the pipette solution from dialyzing into the cell. However, this lack of seal rupture consequently restricts electrical access to the cell interior resulting in an inability to control the membrane potential of the cell. Consequently, the cell-attached configuration allows only control of the patch membrane potential relative to the cell’s resting potential.

Impalement techniques, which forcibly penetrate the membrane of large cells with sharp micropipettes, have been developed. For example, the most commonly employed impalement technique is a two-electrode voltage clamp. In this technique, two electrodes penetrate the membrane where one acts as a dedicated membrane potential sensor and the other as a current injector. Accordingly, the membrane is voltage-clamped by a constant injection (or removal) of current through the current-electrode. The tips of the sharp electrodes are comparatively smaller than those used in the patch-clamp method enabling TEVC to measure the potential inside the cell with minimal disruption to the cytosolic ionic composition. 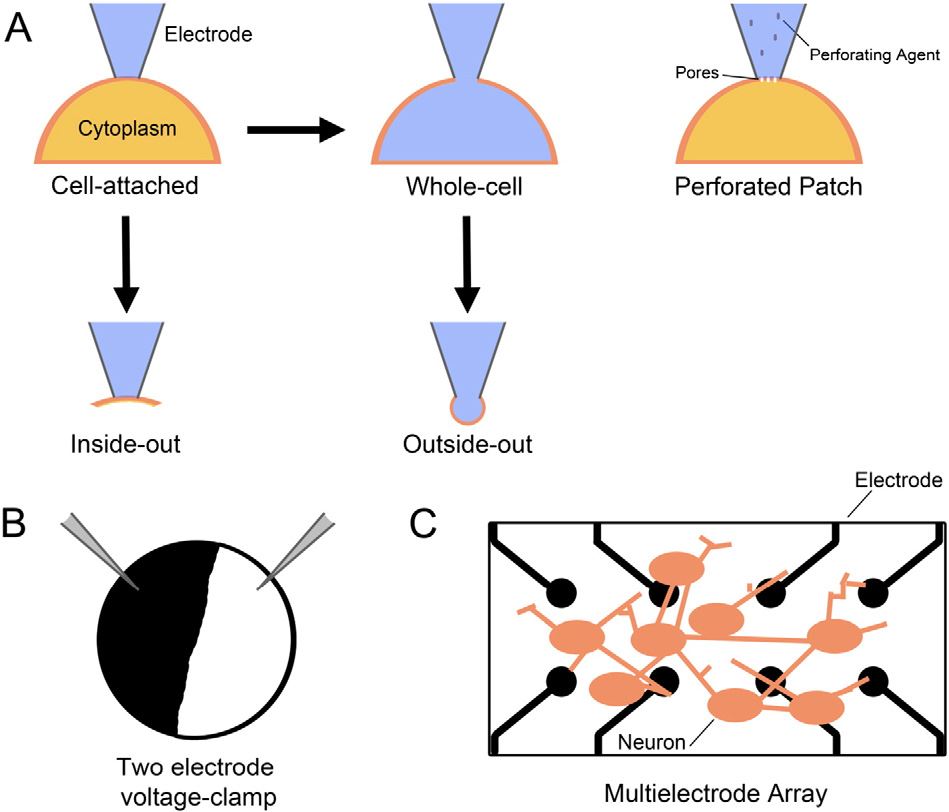 The electrophysiological measures of brain function remain the most valuable method to study the sensory, motor, and cognitive phenomena as they unfold in the human nervous system. Scalp electrical activity results from ensembles of neurons firing in synchrony, which produce oscillatory activity. The oscillatory patterns, which have specific frequency-band characteristics, facilitate neural communication in the brain. The electrophysiological characteristics of individuals are affected by genes that control or modulate a variety of neurotransmitters and other biological factors. Electrophysiological methods have unique and far-reaching applications ranging from clinical and cognitive neuroscience to gene identification and can inform the field regarding prevention and neuropharmacological intervention in a variety of neuropsychiatric conditions, especially substance use disorders.

Future research will focus on newer and more effective electrophysiological techniques available for neurocognitive, genetic, and clinical research. As advancement in technology enhances the opportunity for further applications in clinical research in all spheres, many more tools are being developed in the electrophysiological arsenal to be effectively used to address the current and future challenges. Creative Biolabs is a specialist in neuroscience research. Our team of highly qualified and experienced technical staff will work with you to develop a reasonable and efficient solution for electrophysiological methods. If required, please contact us for further details.

Thank you for your interest in Electrophysiological Methods. Please provide us with your contact information and your local representative will contact you with a customized quote. Where appropriate, they can also assist you with a(n):