Neurotransmitter Release from Neurons and Astrocytes

Neurotransmitter Release from Neurons and Astrocytes

The nervous system is built by two cellular circuits represented by a synoptically connected neuronal network and a complex web of glial cells. Neurons communicate via rapidly propagating electrical signals, the action potentials generated by their excitable plasmalemma. First, action potentials are converted into chemical signals; this process is accomplished through Ca²⁺-dependent vesicular release of neurotransmitters from the presynaptic terminal. Next, this chemical signal carried by neurotransmitters is converted into either electrical excitation or metabolic cytoplasmic signals on the postsynaptic level, thus realizing information transfer in neuronal networks. Finally, in neurons, the calcium-dependent release of neurotransmitters is caused by the exocytosis of quanta of neurotransmitter-filled vesicles from the nerve terminal.

Although unable to generate plasmalemmal action potentials, glial cells communicate through intracellular routes or directly communicate through gap junctions, integrating glia into the three-dimensional web. At the same time, glial cells are endowed with a full complement of membrane channels and neurotransmitter receptors; further, glia can release neurotransmitters via several regulated pathways, including exocytosis. These mechanisms are central for integration within neuronal-glial circuits. Astroglia cells, the most numerous glial cells, can express all types of neurotransmitter receptors known so far. These receptors are activated by released neurotransmitters or by molecules diffusing in the brain extracellular space (volume transmitters). As a result, the astroglia syncytium controls and influences neuronal networks, being responsible for as yet unknown but certainly a quite important part of integrative processes in the central nervous system (CNS). 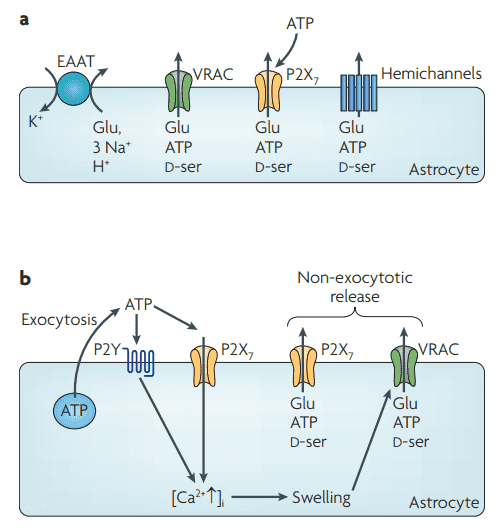 With the recent demonstration of vesicular glutamate transporters and their physiological and homeostatic role, glutamate has all the hallmarks of a conventional neurotransmitter. After glutamate and GABA have been released from neurons as transmitters, some transmitter is partly reaccumulated into neurons or otherwise replenished to maintain adequate levels of excitatory neurotransmission. Nevertheless, most released glutamate is probably accumulated by powerful virtually exclusively astrocytic transporters and thus returned to astrocytes. Here a part is oxidized, whereas the remaining is again converted to glutamine and returned to neurons through the glutamine-glutamate/ GABA cycle for reuse as the transmitter. Glutamine is released from astrocytes via gap junction hemichannels under certain conditions. The astrocytic glutamine release mechanism is a central process in the synapses’ ability to maintain a sustained neurotransmission level.

Three prominent mechanisms have been suggested as potential pathways to underlie glutamate release from astrocytes: reverse operation of glutamate transporters, swelling-induced release, and calcium-dependent exocytosis. Under depolarization conditions or when the Na⁺/K⁺ electrochemical gradient used by these transporters has been reversed, glutamate can be released through these transporters. However, this does not underlie calcium-dependent glutamate release because ligands that cause glutamate release do not depolarize astrocytes, and transport inhibitors do not attenuate the magnitude of ligand-induced glutamate release. In conclusion, both glutamate and GABA operate in neuronal-astrocytic networks, providing excitation and inhibition, respectively. On the one hand, both amino acid transmitters are bona fide neurotransmitters; on the other hand, their importance for regulating brain activity and how they can exert their regulatory activity reaches far beyond conventional transmitters. 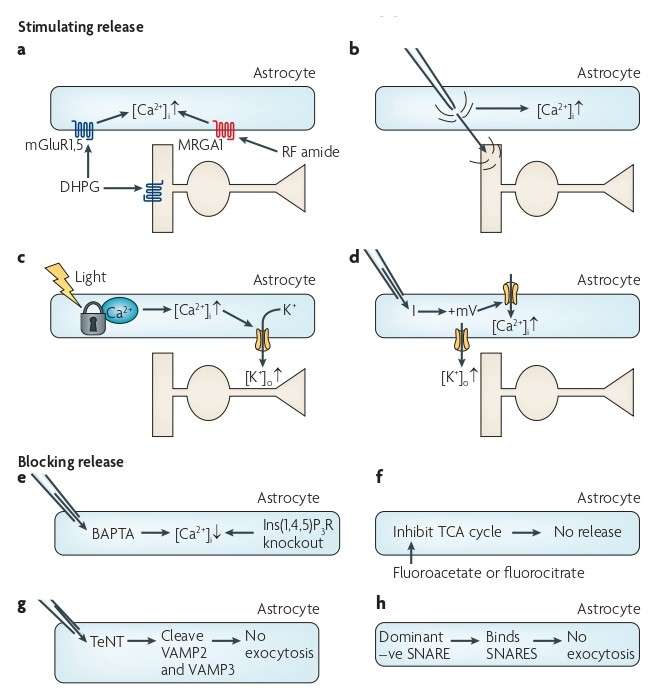 Active in the field of neurosciences, Creative Biolabs is considered a leading provider of a series of neuroscience-related products worldwide. For more information, please directly contact us.

Thank you for your interest in Neurotransmitter Release from Neurons and Astrocytes. Please provide us with your contact information and your local representative will contact you with a customized quote. Where appropriate, they can also assist you with a(n):