The active zone or synapse active zone is used to define the location of neurotransmitter release. Synapses allow two neurons to make close contact and communicate with each other. The synapse consists of a pre-synaptic button of a neuron that stores a neurotransmitter-containing vesicle and another post-synaptic neuron carrying a neurotransmitter receptor. The gap between the two is called a synaptic cleft. When an action potential reaches the presynaptic membrane, the contents of the vesicles are released into the synaptic fissure, and the released neurotransmitter then passes through the fissure to reach the post-synaptic neuron and activate the receptor on the postsynaptic membrane.

The active zone is the area of the pre-synaptic button that mediates the release of neurotransmitters. It consists of a pre-synaptic membrane and a dense collection of proteins in the active zone (CAZ), called the cell matrix. The protein in the synaptic vesicles of the CAZ tether reaches the pre-synaptic membrane and mediates synaptic vesicle fusion, allowing for the reliably and quickly release of the neurotransmitters when the action potential arrives. 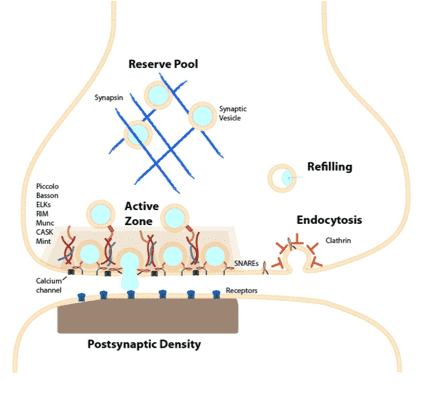 With our easy-to-use guide below, make sure you choose the best cell marker tools for your research needs.

Thank you for your interest in Active Zone Markers Related Products. Please provide us with your contact information and your local representative will contact you with a customized quote. Where appropriate, they can also assist you with a(n):