Fluorescence microscopy is one of the most powerful and widely used imaging techniques in neuroscience research because it can visualize the dynamic processes inside living cells with extremely high sensitivity and specificity. A series of technological developments have jointly promoted the advantages of modern fluorescence microscopy, including laser and detector technology, fluorescent probes, and molecular biology, making it more and more possible to study brain functions at the single-cell level.

In neuroscience research, fluorescence imaging was used to track dynamic processes to understand the neuronal activity, such as action potentials, calcium changes, or neurotransmitter release in vivo and in vitro. Current fluorescence imaging tools, such as fluorescent false neurotransmitters (FFNs), quantum dots (QDs), ligand sensors, genetically encoded Ca2+, and voltage indicators, have been widely used in the study of neuronal processes. Fluorescence-based imaging tools can be divided into two categories: genetically encoded fluorescent biosensors that target fluorescent proteins to specific cells, and non-genetic encoded fluorescent biosensors that include synthetic chemical probes and ligand-directed chemistry. These tools demonstrated the power of fluorescence imaging to advance our understanding of the functional processes of the brain. Below we introduced several applications of high-resolution microscopy combined with fluorescence technology.

Application of Fluorescence Microscopy in Neuroscience

Two-photon excitation (2PE) laser scanning microscope allows high-resolution and high-sensitivity fluorescence stimulation in intact nerve tissue. The 2PE microscope was first applied to neurobiology, using its high resolution in scattering tissue to perform fluorescence imaging of the structure and function of the dendritic spine in brain slices. Recently, 2PE was used to study the dendritic excitation of the intact neocortex and olfactory bulb and to imaging neuronal populations. It resolved the long-standing controversy about the structural plasticity of the adult brain on many spatial scales and may reveal the cellular correlation between learning and memory. 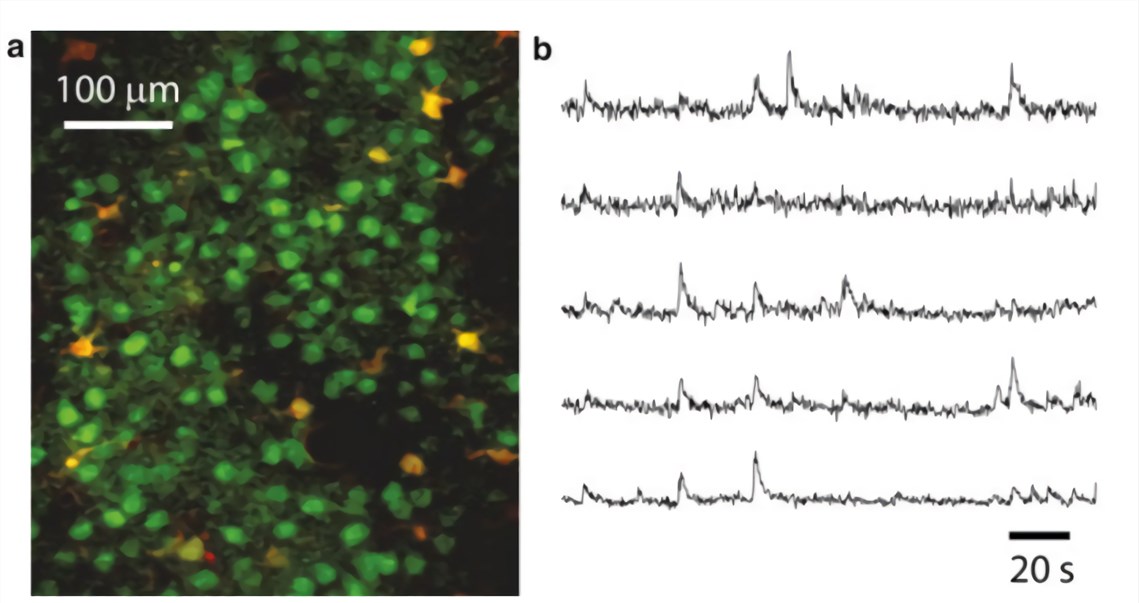 The super-resolution technology effectively breaks the classic diffraction limit by developing the strong nonlinearity between the excitation light and the emitted fluorescence and achieves a spatial resolution of up to a few nanometers in biological specimens. In the study of nervous system development, super-resolution fluorescence microscopy can non-invasively monitor the nano-level dynamics of the synapses of living neurons for a long period of time (> hours). The organization of organelles and proteins in the subsynaptic region has been studied by stochastic optical reconstruction microscope (STORM), and single-molecule-based super-resolution imaging.

XRF mapping has visual tissue properties and is used to describe the neuronal organization in neurodegeneration, especially in Parkinson's disease (PD). The role of Fe, Cu, Zn, and Mn element distribution in oxide regulation or signal activation is still unclear, XRF mapping shows that after calcium activation, nerve cells redistribute a large amount of copper from the cell body to the periphery, and zinc was the element with the largest difference in intracellular and extracellular concentration.

Fluorescence microscopy technology provides a way to visualize neural activity and neuronal communication. The use of this powerful fluorescence imaging technique in neuroscience provides an opportunity for measurements with high spatial and temporal resolution. Future research can realize multi-channel fluorescence detection to deepen the understanding of brain function. Creative Biolabs has advanced technology and a complete laboratory platform, we can provide you with professional analysis and strategies in the fields of neuroscience. Please feel free to contact us if you are interested or have any questions.

Thank you for your interest in Fluorescence Microscopy in Neuroscience. Please provide us with your contact information and your local representative will contact you with a customized quote. Where appropriate, they can also assist you with a(n):