In the past few years of studies, chemical synapses, a group of biological connectors, have shown a promising role in mediating nervous system signal transmission. In general, different signals can be sent by specific synapses to both neuron cells and non-neuron cells, like muscles. A variety of neurons can form information delivery systems in the central nervous system with the help of chemical synapses. Moreover, pilot studies have demonstrated that chemical synapses are critical for nervous system connectivity, body control, as well as biological information computing. A neuron usually can release specific neurotransmitters into the synaptic cleft linked to another neuron. Recent reports have revealed that the neurotransmitters in synaptic vesicles can be released into the synaptic cleft by exocytosis. These neurotransmitters will be bind with their receptors and trigger several potential mechanisms, such as enzyme degradation, to mediate the function of chemical synapses. 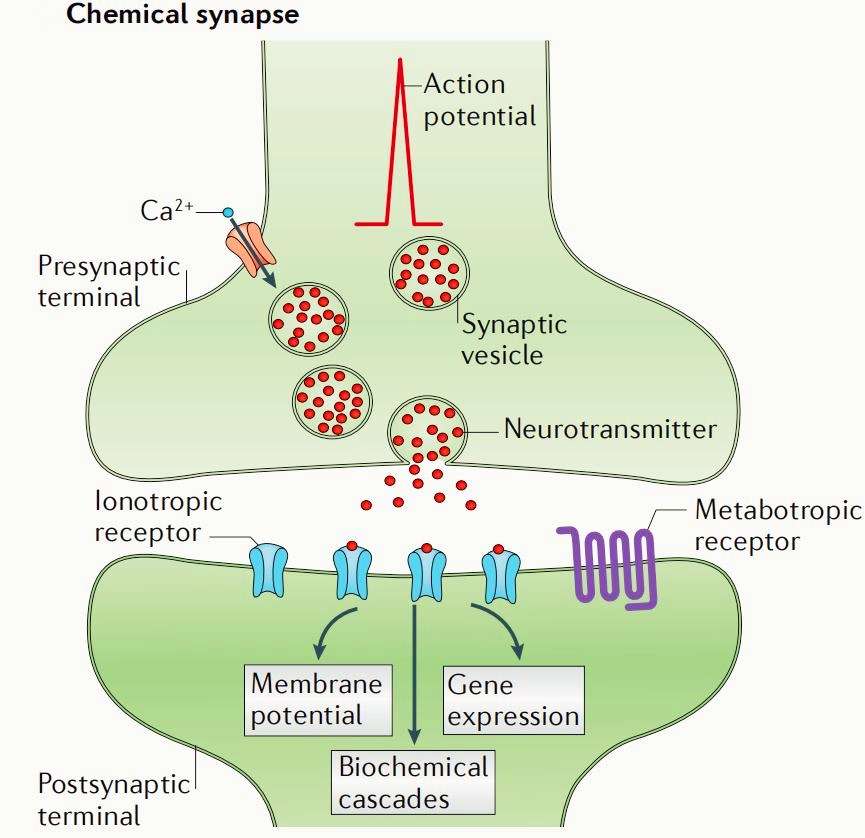 Nowadays, the mechanism of the transmission at chemical synapses has been extensively studied. Normally, when the action potential reaches the end of the presynaptic neuron, the transmission process on the chemical synapse begins. Action potential reaching a certain level can change the membrane potential, which leads to the open of presynaptic membrane voltage-gated calcium channel and a rapid flow of Ca²⁺ into the presynaptic terminals. Furthermore, the high concentration of Ca²⁺ in the presynaptic is essential to the fusion between synaptic vesicles and the plasma membrane of presynaptic neurons. This Ca²⁺-dependent fusion can lead to the release of many neurotransmitters into the synaptic cleft.

In recent years, many studies have shown that receptors can bind neurotransmitter molecules in two common ways. First, the receptor can directly open the presynaptic membrane voltage-gated channel to alter the local transmembrane potential. The second way is based on the regulation of chemical messengers in postsynaptic neurons. However, recent researches have suggested that different changes in the membrane potential (transmembrane voltage) can be observed when neurotransmitters bind to receptors on the receiving cell, some of which can activate their action potential while some can not. As a result, two main postsynaptic potentials, excitatory and inhibitory potentials, have been identified to make the neuron close to the discharge threshold or keep it away from the discharge threshold.

Currently, Creative Biolabs provides a global service chain for worldwide customers in the field of chemical synaptic transmission research. We guarantee the finest results for our customers all over the world. If you are interested in our services, please feel free to contact us for closer communication to learn how we can be involved in your project. Separate services or integrated end-to-end solutions are all welcomed.

Thank you for your interest in Chemical Synaptic Transmission. Please provide us with your contact information and your local representative will contact you with a customized quote. Where appropriate, they can also assist you with a(n):