The ErbB genes encode a family of tyrosine kinase receptors. The name derives from the first isolate of the gene family, an oncogene of the avian erythroblastosis virus (v-ErbB). Subsequent cloning and sequencing of the EGF receptor cDNA demonstrated that vErbB encodes a truncated and mutant variant of the EGF receptor. The current nomenclature uses ErbB1 and EGFR as names for the human and murine EGF receptor genes, respectively, and ErbB2, ErbB3, and ErbB4 for the related genes in mice and man. 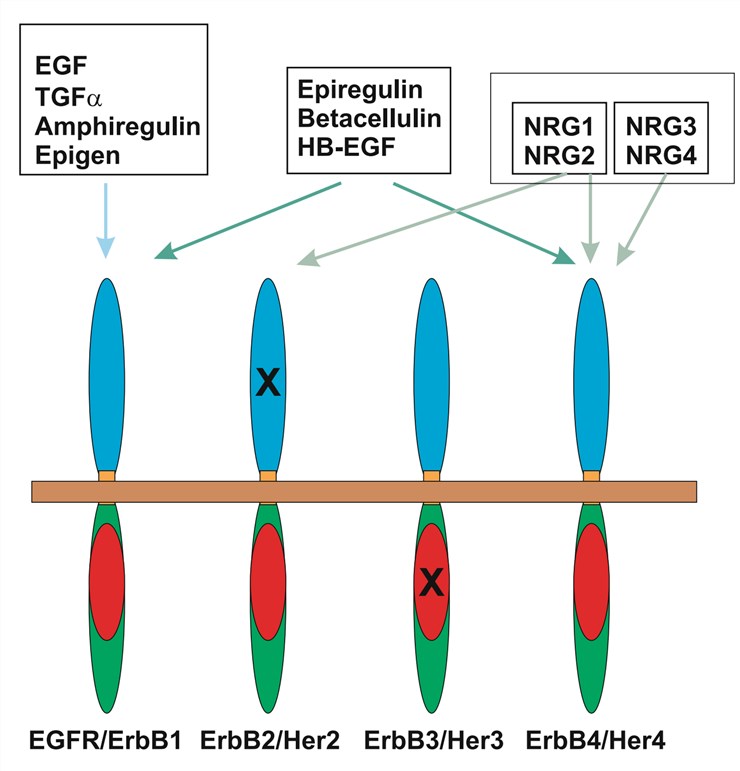 Cell migration is an important process during development, and it is frequently observed that cells migrate over long distances before they settle. One cell population that is well known for its migratory ability comprises neural crest cells, a pluripotent cell population that arises from the dorsal neural tube. To detach from the neural tube, neural crest cells undergo an epithelial-mesenchymal transition and subsequently migrate over long distances to various sites, where they differentiate into an astonishing number of cell types. They generate the diverse neuronal and glial cell types of the peripheral nervous system, melanocytes in the skin, bone, and cartilage in the head, and contribute to the heart. The diversity of cell fates generated from the neural crest, and their migratory behavior have fascinated developmental biologists. Molecules that direct migration, allow motility or migratory arrest, as well as the signals that maintain pluripotency or control differentiation, have been intensely studied.

ErbB receptors bind Nrgs and transmit Nrg signals from the cell surface into the cytoplasm. The signaling of ErbB receptors has been extensively studied, and biochemical and structural studies done on ErbBs provided a paradigm for the molecular mechanisms employed for signal transduction of tyrosine kinase receptors. Shortly, ligand binding induces receptor dimerization and/or oligomerization, activation of the tyrosine kinase, and tyrosine phosphorylation of the cytoplasmic domain of the receptors. Various molecules are recruited to the phosphorylated tyrosine residues, allowing the activation of intracellular signal transduction pathways like Ras/Map-kinase and PI3-kinase/ Akt, thus eliciting migration, proliferation, cell survival, and differentiation. In addition, non-canonical signaling of the ErbB receptors and Nrg1 have been described, which rely on the cleavage of the receptor or the ligand, and nuclear translocation of the released fragments.

The receptor tyrosine kinase ErbB3 is strongly expressed in neural crest cells. ErbB3 is downregulated in most derivatives of neural crest cells, except for Schwann cells that maintain ErbB3 expression. Mutations in Nrg1, ErbB2, or ErbB3 in mice cause deficits in development; the changes in neural crest development are observed to a similar extent in the three mutant strains. A careful analysis of neural crest cells in the trunk demonstrated that they did not migrate appropriately. In particular, the cells were unable to move along the ventral path used by sympathogenic neural crest cells to reach their target, the mesenchyme lateral of the dorsal aorta, and instead got stuck at dorsal positions. Two isoforms of Nrg1, type I and type III, are thought to control the migration and development of the distinct neural crest cell populations in mice. The two isoforms are expressed in distinct patterns. Type I Nrg1 is produced by mesenchymal cells along the migratory route and at the target of the sympathogenic neural crest, whereas type III Nrg1 is produced by peripheral neurons that are accompanied by Schwann cells.

Among the neural crest cell derivatives that depend on Nrg1, Schwann cells have been most extensively studied. Schwann cell precursors can be identified as early as E11 in the mouse or E12 in the rat by their distinct molecular phenotype and close contact with outgrowing tracts of peripheral axons. The availability of purified precursors allowed the definition of their growth factor requirements. Cultured Schwann cells grow poorly in the presence of serum but proliferate actively in the presence of Nrg1. Particularly noteworthy in this context is the early identification of a mitogen for purified Schwann cells, which corresponds to a soluble isoform of Nrg1 originally termed glial growth factor or GGF. The genetic analysis of the Nrg signaling system demonstrated that Schwann cells and their precursors are indeed a primary target for Nrg1 signaling during vertebrate development. Mice mutant for the ErbB3 gene, for example, display a lack of Schwann cells in peripheral nerves. The Nrg1 signal is thought to affect the migration of the Schwann cell precursors along the developing axon tract, and, in addition, adjust the size of the Schwann cell precursor pool. Neurons that lack the accompanying glia appear to die in the long term; thus, sensory neurons and motoneurons, which are ensheathed by Schwann cells in normal development, are generated correctly in the mutants but degenerate over time. Experiments using chimeric mice that contain ErbB3 / and wild-type cells indicated that the degeneration is caused by indirect mechanisms, apparently by the lack of Schwann cells. 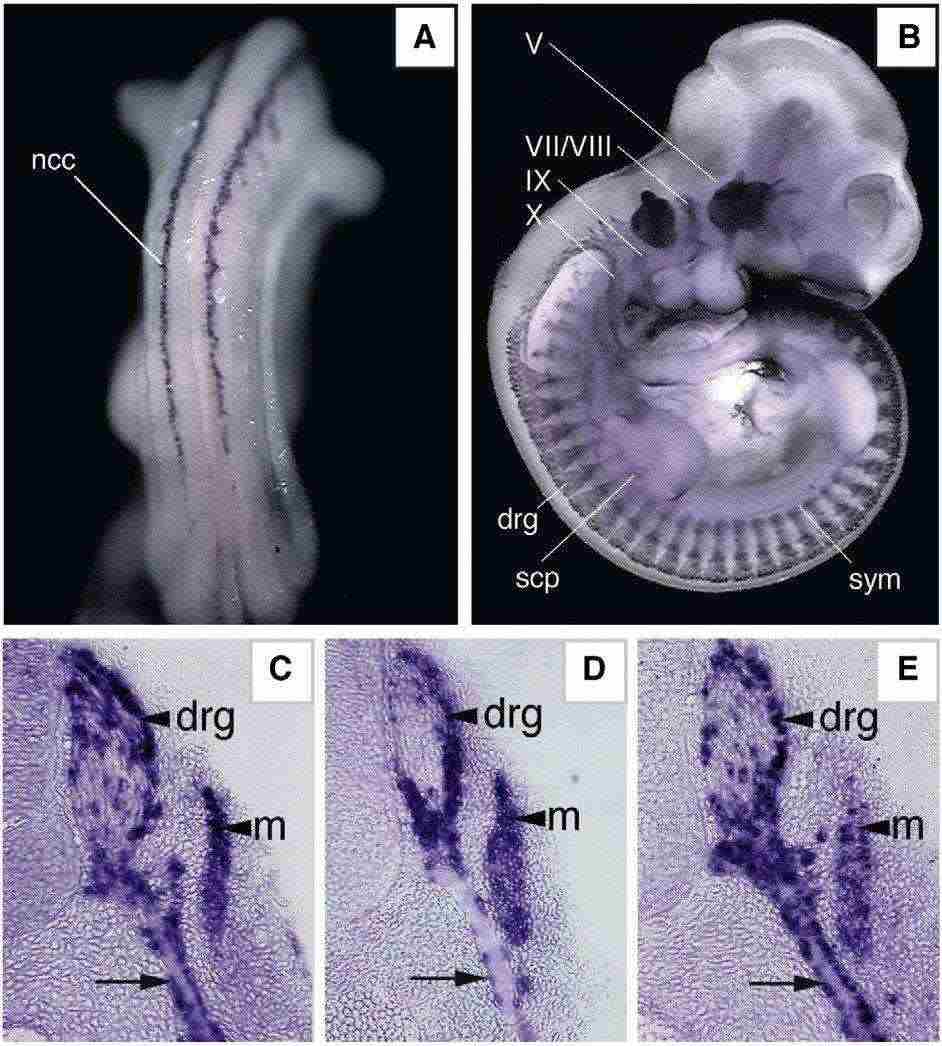 With years of experience focusing on neuro-based research, Creative Biolabs has extensive experience and gradually improved our platform. We are now capable of offering a variety of high-quality neuro-based services and products to global customers. Our Ph.D.-level experts specialized in neuro will also help you with any problems. We are committed to providing customer satisfaction and always make efforts to this end.

If you are interested in neuro products and relevant services or have any other questions about our services, please feel free to contact us for more information.

Thank you for your interest in ErbB Role in Neural Crest Cell Development. Please provide us with your contact information and your local representative will contact you with a customized quote. Where appropriate, they can also assist you with a(n):