Exocytosis is a process of the fusion of secretory vesicles with the plasma membrane. Substances in the vesicles are expelled into the extracellular space and new proteins and lipids are incorporated into the plasma membrane. Exocytosis allows different types of molecules, such as neurotransmitters or proteins, to be transported outside the cell through different transport systems. Pilot studies have demonstrated that exocytosis can be classified into two types, constitutive exocytosis, and regulated exocytosis. Among them, regulated exocytosis is mainly used for the transport of special cells, including neurons, endocrine as well as exocrine cells, which can be triggered by increasing the concentration of cytoplasmic free Ca2+. A small number of regulated secretory vesicles can fuse with the plasma membrane in response to cellular stimuli, and most vesicles can combine with networks of synaptic proteins or actin filaments to defend against subsequent stimuli. Up to now, numerous data have shown that the kinetics and Ca2+ dependency mediated by different neuron cell types are very different. 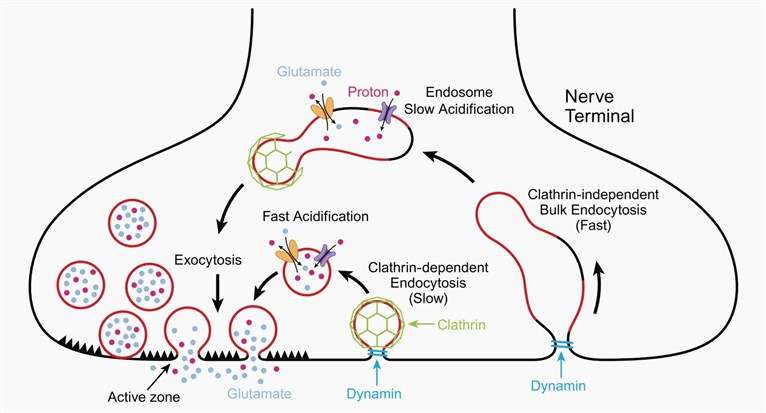 The Mechanisms of Exocytosis

The mechanisms controlling regulated exocytosis have been extensively studied in the past few decades. The membrane fusion depends mainly on the negative charge associated with the composition of vesicles and lipid bilayer phospholipids. Normally, the process of fusion needs the interaction of energy and special molecules present in the vesicles and plasma membranes. These molecules are highly selective, only the right molecules are allowed to bind to each other, thus reducing the damage to the cells. When molecules bind to each other, the energy stored and released by ATP forms a fusion pore between the vesicle and plasma membrane. As the fusion pore expands, the substances of the vesicles are released to the outside of the cell. Vesicles eventually become part of the plasma membrane or are recycled back into the cytoplasm. Besides, neurotransmitters are usually released from the synaptic vesicles into the synaptic cleft by exocytosis, and they can also be released by reverse transport of membrane transporters.

Nowadays, a wide variety of regulatory factors, molecules, and proteins involved in exocytosis have been identified and partial characterized, including but not limited to:

For instance, calcium channels and SNARE proteins-mediated exocytosis has been revealed in recent years. The results have suggested that the secretory vesicles formed on the trans-Golgi network of neurosecretory cells undergo several steps, such as tethering, docking, and priming before they can fuse with the plasma membrane and transport their contents outside the cell. Furthermore, these findings have also indicated that the key role of the SNAP25 protein and a dependent activator protein (CAPS) in transient vesicle fusion.

Therefore, Creative Biolabs is pleased to share our extensive expertise in the nervous system and facilitate our clients’ exocytosis-based research and project development. If you do not find a specific service item you are looking for, please directly contact us. We can design and customize your project and generate the exact solution you need.

Thank you for your interest in Exocytosis. Please provide us with your contact information and your local representative will contact you with a customized quote. Where appropriate, they can also assist you with a(n):