The neuromuscular junction (NMJ) is a chemical synapse formed between motoneurons and skeletal muscles and covered by Schwann cells (SCs). Upon the arrival of action potentials, the motoneuron terminals release acetylcholine (ACh), which activates ACh receptors (AChRs) of muscle fibers to depolarize the muscle cell and trigger calcium release from the sarcoplasmtic reticulum to initiate muscle contraction. The NMJ is thus essential for our physical mobility and daily life.

NMJ formation involves the differentiation of presynaptic nerve terminals, postsynaptic muscle membranes, and terminal Schwann cells (tSCs). Prior to the arrival of motor nerve terminals, muscle fibers form primitive, small, or thin AChR clusters that are distributed in the central region; this phenomenon is called muscle prepatterning. As the nerve terminals innervate muscle fibers, they induce new clusters and disperse those in nonsynaptic areas; consequently, NMJs are formed in the middle region of muscle fibers. Initially, AChR clusters appear like oval plaques that are often innervated by more than one axon. As the NMJs mature, the plaques become perforated and eventually appear as pretzel-shaped arrays of AChR. Branches are filled with junctional folds that are usually perpendicular to the long axis of the arrays, and AChRs are concentrated at the shoulder areas of junctional fold crests at an estimated concentration of 10,000/μm2. Facing the AChR clusters are active zones of the presynaptic membrane. The NMJ is covered by tSCs that are necessary for its formation, maintenance, and regeneration. As NMJs age, AChR clusters break into fragments that could be poorly innervated and spread in a larger area than that of the original pretzel. 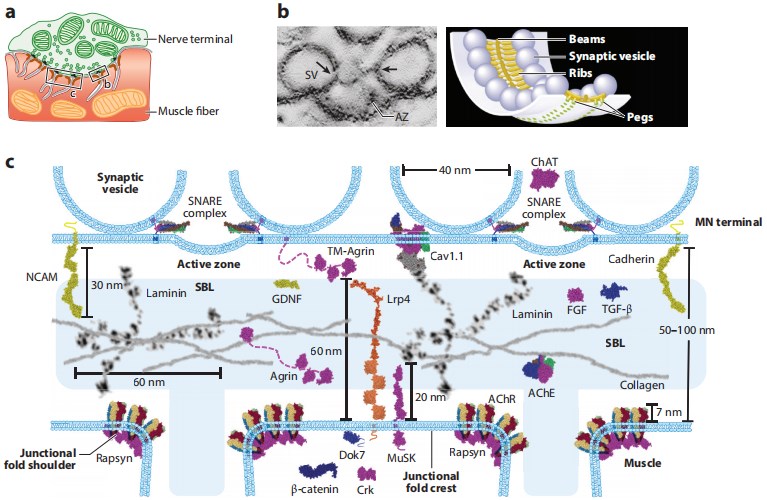 The NMJ only occupies approximately 0.1% of the surface area of a myofiber but initiates action potential propagation required for force generation and myofiber maintenance. It is a chemical synapse and uses different neurotransmitters in different species: ACh in vertebrates, glutamate in Drosophila, and both ACh and γ-butyric acid in Caenorhabditis elegans. The NMJ is a critical player in transducing motor neuron signals and triggering skeletal muscle contraction in a rapid, reliable, and precise manner. Deficits in NMJ formation and maintenance cause neurological disorders, including congenital myasthenic syndrome (CMS) and myasthenia gravis (MG). Studies of the NMJ have also contributed to our understanding of the structure and function of synapses in the brain.

Gap junctions are intercellular channels that are composed of integral transmembrane proteins named connexions. A gap junction channel consists of two hemichannels (connexon) which are contributed by two neighboring cells. Each connexon is composed of six connexin proteins. Gap junctions permit the intercellular bidirectional diffusion of nutrients, ions, metabolites, second messengers, such as K+, Ca2+, cAMP, IP3, and other small molecules of about 1000 Da or less than 16A in diameter. There are also hemichannels that remain unpaired after being transported to the membrane until they align with another hemichannel located on an adjacent cell to form a gap junction channel. These hemichannels have important functions too.

Gap junctions allowing intercellular electrotonic and metabolic coupling are expressed in organs and tissues which depend on rapid intercellular signal transfer and communication, including the heart, skin, inner ear, and brain. They play an important role in brain development and maturation and have been implicated in neural stem and progenitor cell proliferation, as well as in cell migration and differentiation. Gap junctions help to coordinate cell firing in neuronal networks and adjust metabolic and transcriptional activities between coupled neurons and astrocytes. In all metazoans, gap junctions function to facilitate direct communication between cells. Gap junctions are expressed abundantly in various tissues where they perform many different tasks; for example, gap junctions form electrical synapses, and contribute to pattern formation establishment, wound healing, regeneration, and embryonic development.

Creative Biolabs has extensive experience in neuro research and has established a comprehensive research platform focusing on neuro-based products as well as relevant services. We integrate all our resources accumulated from years of practice to provide customers with a comprehensive and comfortable one-stop service.

If you are interested in neuro products and relevant services or you have any other questions, please feel free to contact us for more information.

Thank you for your interest in Neuromuscular Junctions and Gap Junctions. Please provide us with your contact information and your local representative will contact you with a customized quote. Where appropriate, they can also assist you with a(n):