In the past decades, Physiologists have always been puzzled by how nerves work to their target tissues. Based on the rapid development of electrophysiology, people have discovered the electrical activity of neurons. Scientists have observed that signal transmission can be mediated by action potential from neurons to the responding tissues. Action potential refers to rapid, sudden, and short-lived changes in the membrane. It is produced in different cell types, such as endocrine cells, muscle cells, neurons, and even plant cells. 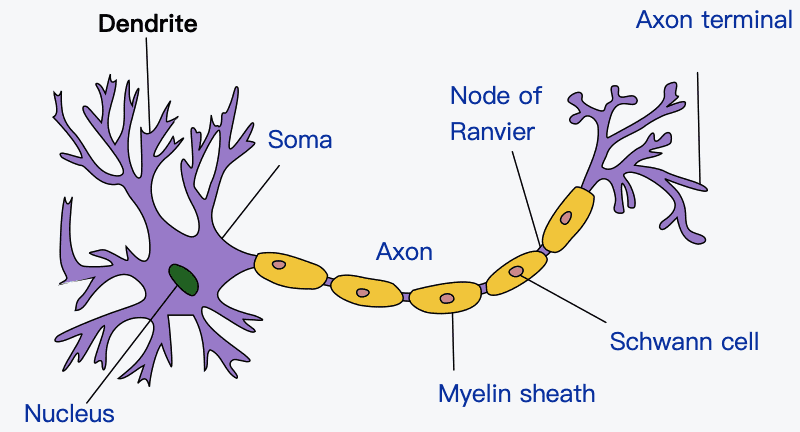 Fig.1 Structure of a typical neuron.

Introduction of Axons, and Dendrites

The axon is where the action potential is generated, and it is the spike initiation zone for action potentials. With the long and thin structure, it serves as the transmission part of the neuron. After initiation, action potentials travel down axons, which leads to the release of neurotransmitters. This area is characterized by a high concentration of voltage-activated sodium channels.

The dendrite is the receiving part of the neuron to collect synaptic inputs from axons. The protrusions, also known as dendritic spines, are designed to capture the neurotransmitters released by the presynaptic neuron. In general, there are ligand-gated ion channels with high concentrations. The total amount of dendritic inputs determines whether the neuron will fire an action potential.

As a global company with extensive scientific expertise, we guide clients from discovery to approval and provide continuity for their entire program. Now we can provide a series of services and products for neuroscience research. If you are interested in our services and products, please do not hesitate to contact us for more detailed information.

Thank you for your interest in Action Potentials, Axons, and Dendrites. Please provide us with your contact information and your local representative will contact you with a customized quote. Where appropriate, they can also assist you with a(n):