C. elegans is an early-discovered model organism, which can bridge the difference between in vitro and in vivo experiments by adapting to high-throughput technology while providing physiologically relevant data obtained from the whole animal environment. Certain characteristics of C. elegans make it a powerful tool for scientific research, including:

C. elegans is a unique model for dissecting molecular events in neuro development. Soon after being introduced into the model, C. elegans was mapped at the level of genes, cells, and synapses, providing a key breakthrough in neurodevelopmental research with complete cell lineage, sequencing genomes, and linker. Its nervous system is composed of 5000 synapses, 302 neurons, 387 male neurons, 50 personality-sharing endothelial glia, and 6 related mesothelial glial cells and other subcutaneous cells. The discovery process is long and complicated.

Fig.1 The development process of C. elegans in neurodevelopment. (Rapti, 2020)

C. elegans was the first multicellular organism to sequence its genome. Its genome sequencing and subsequent gene mapping methods can identify all mutations that damage the development of the nervous system. Neural development proceeds through core processes such as nerve cell generation and differentiation, pathfinding, target selection and connection. Research on C. elegans revealed the principles that shape the surprising complexity of the nervous system. 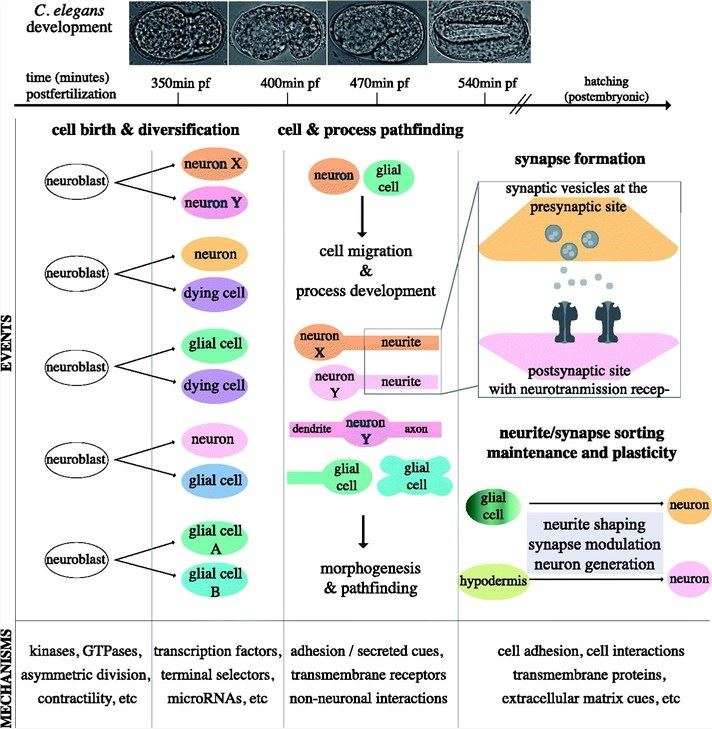 Key Discoveries Based on C. elegans

In 1993, the first presenile protein was discovered in C. elegans. Two years later, mutations in the human presenilin-1 gene were associated with early-onset familial AD.

In 1997, genetic studies of C. elegans identified negative regulators of the insulin signaling pathway. One of the genes, daf-16, encodes a homologous gene of the C. elegans forkhead transcription factor FOXO70. Five years later, the loss of FOXO function rescued the diabetic phenotype of insulin-resistant mice.

The antidepressant fluoxetine has been shown to increase the energy signal of serotonin by inhibiting the serotonin reuptake transporter SERT4 of C. elegans.

Although in most cases, the results of C. elegans phenotype research cannot be directly translated into human pathology, C. elegans analysis simulates some significant features of human pathology from multiple angles. These helps clarify the underlying molecular mechanisms of human diseases and provide new methods for treatment strategies.

Creative Biolabs has advanced technology and mature methods in the research of neuroscience problems. We are committed to providing customers with high-quality R&D services and assistance on neurological research issues. Please feel free to contact us if you are interested or have any questions.

Thank you for your interest in C. elegans in Neurosciences. Please provide us with your contact information and your local representative will contact you with a customized quote. Where appropriate, they can also assist you with a(n):