Introduction of TEA and K Channels

K channels are widely distributed transmembrane proteins that play an important role in many different aspects of the electrical response of the nervous system. For example, K channel activity determines the frequency of action potentials and the shape of the action potential waveform. In addition, K channels may play a role in setting the resting membrane potential of a neuron, regulate the excitability of individual neurons, and control the strength of synaptic contacts between neurons.

TEA is a small organic cation, which blocks voltage-dependent K channels in nerve and muscle cells. However, different types of K channels have different sensitivities to TEA. As an important K channel inhibitor, TEA has been extensively used as a probe to detect the structure of the K channels ion permeation pathway, and its ability to block several K channels has been well demonstrated. 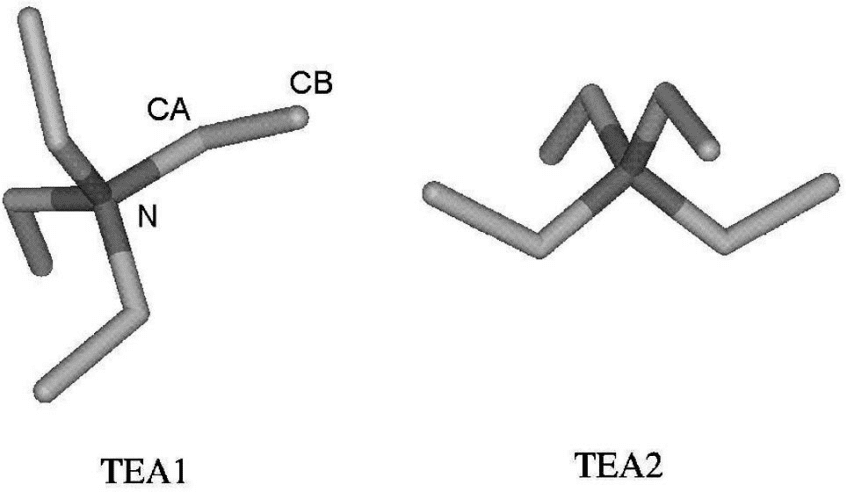 Fig.1 The pyramidal and quasi-planar conformations of TEA. (Luzhkov, 2001)

Almost all K channels are easily blocked by TEA. The blocking mechanism of TEA is a hot topic in the field of ion channels. A seminal study proposed that TEA inhibits K channels because it acts like a fully hydrated K ion that cannot dehydrate. According to this view, TEA enters the K channel pore and follows the osmotic pathway to the last binding site that can be occupied by a hydrated K ion.

The binding of TEA at both sites of K channels requires the presence of permeant ions and results in their redistribution in the selectivity filter. This change in ion distribution underlies the interdependence of the internal and external TEA-binding sites, contributes to the voltage-dependence of TEA blockade and for internal TEA binding, and leads to a conformational change in the selectivity filter that may manifest itself functionally as inactivation.

It should be emphasized that TEA has a variety of pharmacological effects. These effects may be divided into two classes. First, as a quaternary ammonium ion, TEA may antagonize or mimic the physiological effects of the quaternary ammonium ion. The second group of effects involves the ability of TEA to affect mechanisms of permeability or transport of small cations, especially K.

TEA blocks permeability sites underlying electrical excitability and K-permeability in a specific way in nerve, muscle, sensory, epithelial, and other animal cells and certain excitable plant cells. K channels catalyze the selective transfer of K across the cell membrane, which plays an important role in setting the resting potential in cells, controlling heart rate, and modulating the firing pattern in neurons. As a K channel blocker, it is used to probe the structural and functional properties of K channels.

In addition, many pathophysiological conditions may result from the abnormal activity of neuronal K channels. Some of these diseases are related to the abnormal function of K channels.

TEA has been and remains a powerful weapon in the pharmacological and intellectual armory of electrophysiologists. Creative Biolabs has a professional platform providing the leading services related to neurotoxins. We are a multidisciplinary, qualified, and experienced team. If you want to know more, please do not hesitate to contact us for more detailed information.

Thank you for your interest in K Channel Inhibitors: Tetraethylammonium. Please provide us with your contact information and your local representative will contact you with a customized quote. Where appropriate, they can also assist you with a(n):