Tetrodotoxin (TTX) is a potent neurotoxin. As a sodium channel blocker, it can prevent the nervous system from carrying messages. Now it has been widely applied to many medical and research applications.

TTX is a heterocyclic, organic perhydroquinozolineamine molecule neurotoxin, which is both water-soluble and heat stable. It was first discovered from the ovaries of globefish in 1909. TTX is a natural, powerful neurotoxin known from a wide array of animals around the world. It can enter the body in multiple ways, which has been extensively used to clarify the role of specific voltage-gated sodium channels (VGSCs) subtypes in a wide range of processes in the nervous system. Since TTX blocks the subset of VGSCs in a highly selective manner, it may play a potential role in pain relief. 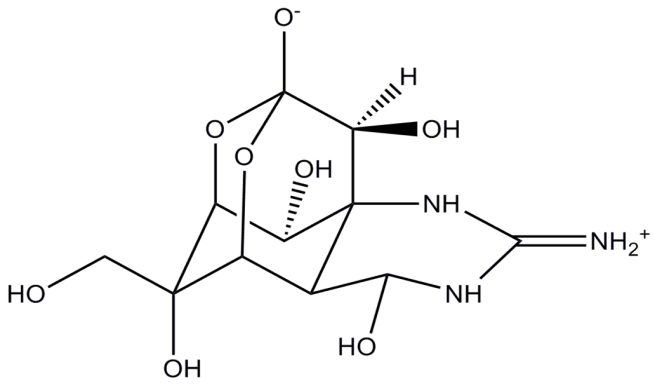 The Mechanism of TTX Action

The VGSCs are large integral membrane proteins composed of an α-subunit and one or more auxiliary β-subunits. They are members of the ion channel protein superfamily, and the VGSCs play an essential role in the initiation and propagation of the neuronal signal.

TTX binds to neurotoxin receptor site 1 on the α-subunit within the outer vestibule of the VGSC and blocks the influx of sodium ions by occluding the outer pore of the channel. This binding inhibits the propagation of action potentials, thereby paralyzing nerve and muscle function. 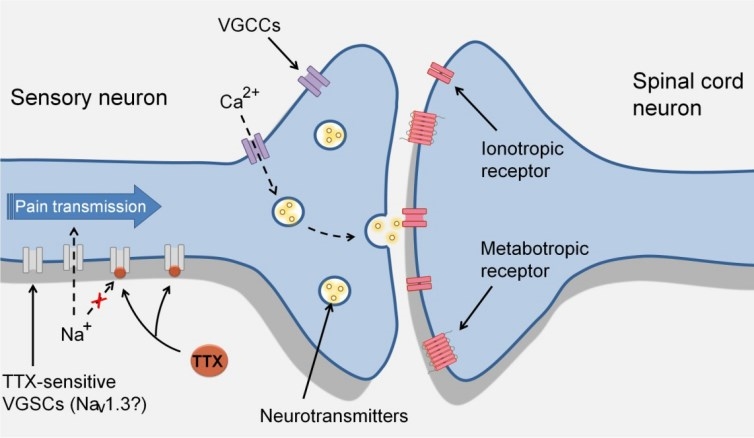 The use of TTX holds on their mechanisms of action, mainly the blockade of VGSCs, and to alter the neuronal function. The most promising therapeutic use of TTX is perhaps in the treatment of certain pains.

TTX can be used as a local anesthetic (LA) for its no strong interaction with NaV1.5 and the binding site of TTX is located outside the membrane, which is different from the standard LAs. Thus, a combination of TTX with other LAs often results in a synergistic effect. For instance, the combination of TTX and lidocaine will produce a local anesthetic effect via sciatic nerve block in rats, while neither TTX nor lidocaine alone will do so. In addition, TTX is used as a vasoconstrictor, whose toxicity can be decreased by epinephrine, this approach renders a promising strategy for prolonged local anesthesia effect.

Furthermore, Combining TTX with other drugs controlled the slow release of drugs and prolonged duration of sensory or motor nerve block in rats. Recently, a method for subcutaneous delivery, repeatable, and adjustable analgesia has been developed, and TTX-dimethylamine as a payload.

Some researchers are trying to utilize the analgesic activity of TTX to treat various types of pains such as in severe cancer. TTX proved to be a valuable player in combating cancer. For example, the tumor growth in Ehrlich ascites carcinoma - bearing mice was significantly reduced with TTX treatment. TTX can also inhibit the mobility or invasive behavior of tumor cells and prevent the metastasis of several lines of highly metastatic cancers and leukemia. Both positive effects described above originate in the interaction and blocking of toxins on the VGSCs of the non-excitable cells, resulting in disordered cell metabolism and cell death. As a drug for pain in cancer patients resistant to common pain treatments, TTX was evaluated by several levels of clinical trials.

The therapeutic application of TTX for the treatment of opioid addiction is based on a preclinical study in rats and mice, which demonstrated that TTX can alleviate an acute heroin withdrawal effect. In another clinical study, the effect of TTX in relieving heroin withdrawal effect was investigated. The results revealed that there was a statistically significant increase in the rate of alleviating opiate withdrawal syndromes compared to the placebo arm.

The application of TTX has been investigated for medical purposes other than the above applications. These investigations include urinary bladder dysfunction studies in pigs, corneal injury-induced photophobia in rats, or schizophrenia in rats.

Creative Biolabs offers well-established and innovative One-Stop-Shop TTX solutions. When partnering with us there is no need to change providers. You can count on our skilled and passionate workforce to find the most suitable path and to guide you through your research journey. We can make your project easier. If you want to know more, please do not hesitate to contact us for more detailed information.

Thank you for your interest in Na Channel Inhibitors: Tetrodotoxin. Please provide us with your contact information and your local representative will contact you with a customized quote. Where appropriate, they can also assist you with a(n):