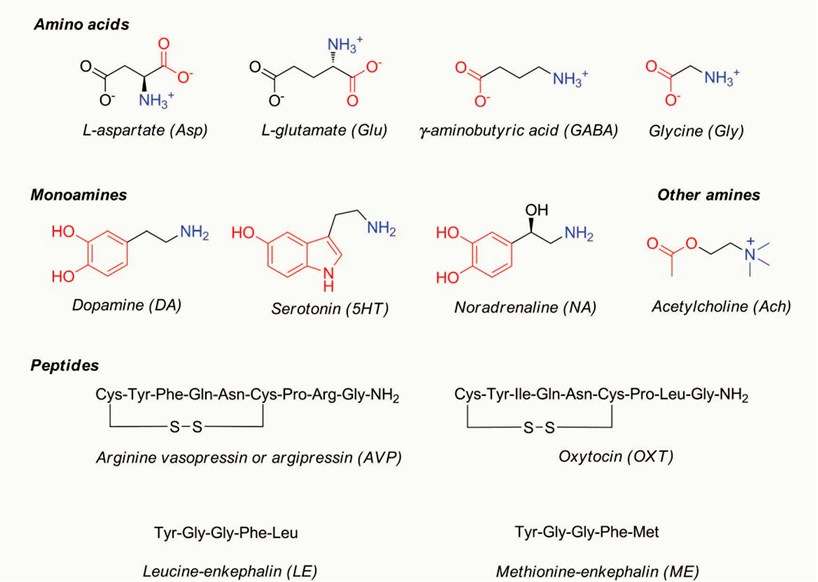 In chemistry, most neurotransmitters belong to small molecules, peptides, or amino acids. Till now, seven neurotransmitters, acetylcholine, glutamate, dopamine, noradrenaline, gamma-aminobutyric acid (GABA), serotonin, as well as norepinephrine, have been discovered and widely studied. The data have suggested that neurotransmitters can transmit specific chemical signals from neurons to target cells, like glands. Furthermore, recent reports have revealed that several neurotransmitters may regulate the brain functions, such as concentration, digestion, and muscle movement. The following sections describe some popular neurotransmitters.

Acetylcholine is a type of acetic acid and choline ester. Numerous data have indicated that it is a small molecule neurotransmitter that is important to regulate muscle contractions, stimulate hormone production, as well as control the heartbeat. It is also essential for maintaining cognitive function in the human body.

Glutamate is a kind of amino acid anion. It is a conjugate base of glutamic acid. It has an anion carboxyl group and cation amino group. It has become one of the main excitatory neurotransmitters in the nervous system. However, its derivative (GABA) has been regarded as a key inhibitory neurotransmitter in synaptic transmission.

Dopamine is a major neuromodulator involved in pleasure or reward. In general, it consists of a catechol structure and is responsible for regulating muscle movement, learning, and behavior. Many studies have shown that the deficiency of dopamine in the human body is one of the main causes of Parkinson's disease.

Noradrenaline is a catecholamine neurotransmitter that can mediate physiological responses of stress and acute anxiety in humans. Besides, recent researchers have illustrated that it can promote alertness, enhance memory formation, and help focus attention in the brain.

Creative Biolabs is a leader in the field of nervous system signal transmission studies and has focused on novel neurotransmitter development and assessment services for years. We have experienced experts and advanced platforms that can provide excellent services. If you are interested in our services, please contact us for more details.

Thank you for your interest in Neurotransmitter Chemistry. Please provide us with your contact information and your local representative will contact you with a customized quote. Where appropriate, they can also assist you with a(n):