The synapse is a fundamental and inseparable element of the neuron and neuronal networks. It is classically defined as a specialized structure, which mediates fast, targeted, and temporally precise communication between neurons as well as between neurons and their nonneuronal followers. The invention of the synapse is arguably one of the greatest triumphs of biological evolution. Coordinated and dynamic interactions of billions of neurons via a myriad of synaptic connections generate an extraordinary wealth of programs governing the vast diversity of bodily functions and behaviors. Intercellular communication in the nervous system is mediated by two types of dedicated structural arrangements: electrical and chemical synapses. These two configurations are named according to the mechanism involved in transmission. 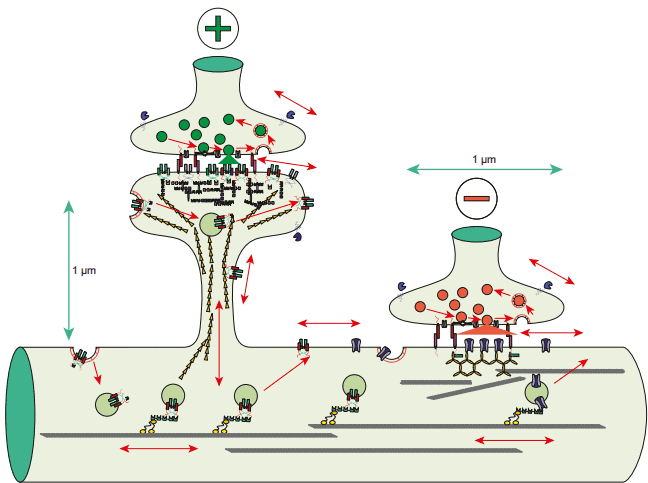 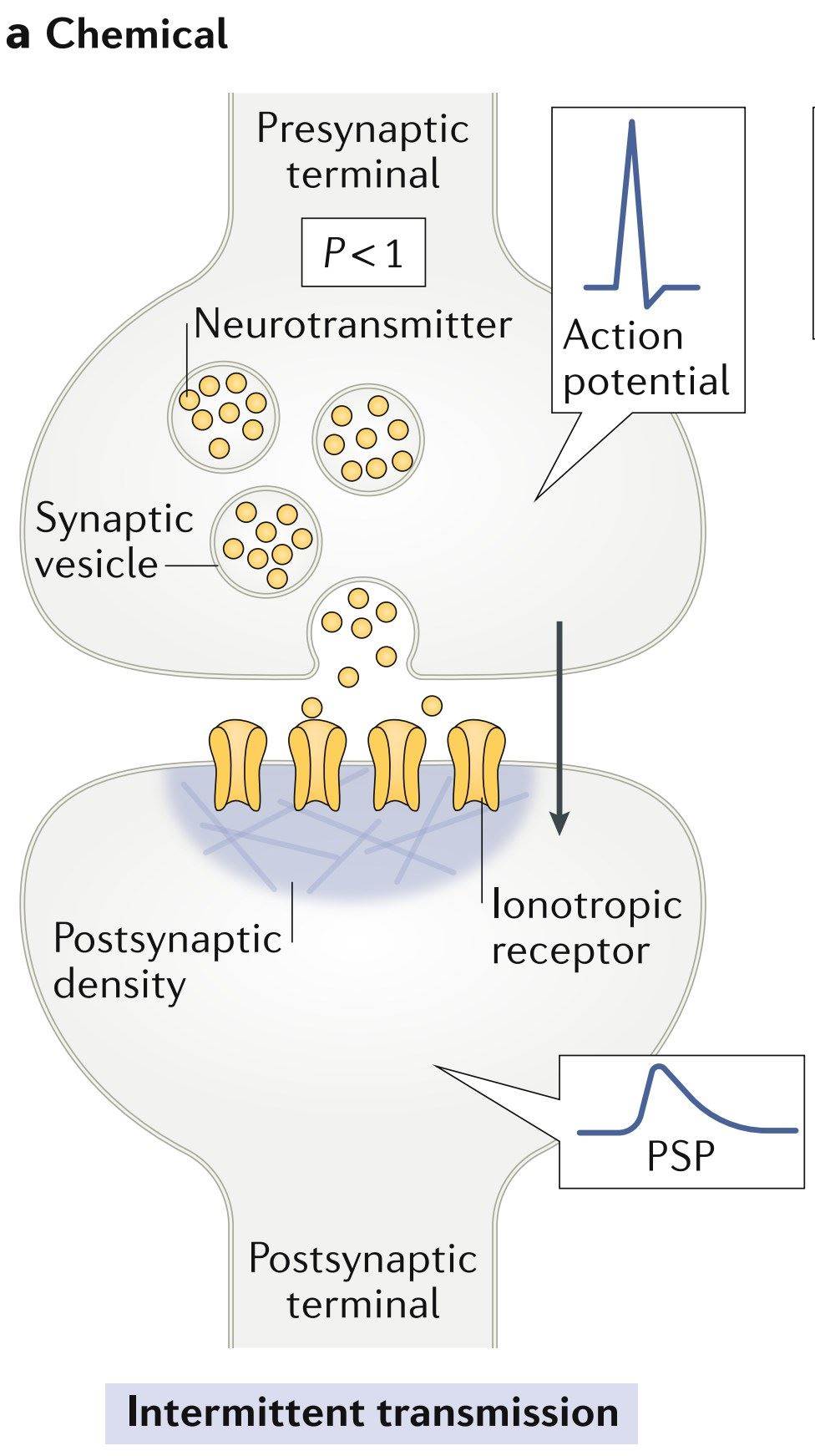 Chemical transmission involves the Ca2+-dependent release of a transmitter substance that is generally triggered by an action potential from a presynaptic cell. In turn, the transmitter acts on specific receptors at a postsynaptic cell. In the case of fast synaptic transmission, the receptors constitute ligand-gated ion channels, the opening of which leads to changes in the membrane potential known as postsynaptic potentials (PSPs), which can be depolarizing or hyperpolarizing. However, transmitter receptors can also be linked to G proteins and have slower, metabotropic actions that can trigger a range of biochemical cascades, promoting various postsynaptic responses including gene expression.

In contrast to chemical transmission, electrical transmission is mediated by intercellular channels that enable communication between the interior of two adjacent neurons. These channels aggregate into clusters that are known as gap junctions. Gap junctions are not exclusive to neurons and are present in nearly every tissue of most organisms, allowing the exchange of small metabolites and signaling molecules. In neurons and cardiomyocytes, which exhibit mainly electrical signaling, gap junctions also provide a conductive pathway for the spread of electrical currents between interconnected cells. Accordingly, electrical currents underlying action potentials directly spread to a postsynaptic neuron, as do those underlying subthreshold signaling events such as PSPs and/or membrane oscillations, generating coupling potentials in the postsynaptic cell with time courses that are similar to those of the presynaptic signals. Moreover, because electrical transmission is characteristically bidirectional, signaling events generated in the postsynaptic cell also spread to the presynaptic cell, thereby rendering the definition of presynaptic and postsynaptic cells arbitrary and context-dependent.

Electrical synapses (or neuronal gap junctions) are relatively simple devices compared to chemical synapses. They form intercellular channels that span the plasma membranes and directly connect the cytoplasms of adjoining cells by paired hemichannels (connexons), each an oligomer of six proteins. The channel allows direct transmission of ions for the propagation of electrical currents as well as the exchange of small metabolites or second messengers up to 1 kDa in mass or less than 16 Å in diameter. Transmission is driven by the electrochemical gradients between adjoining cells. Gating is modulated by transjunctional voltage, pH, intracellular acidification, or lipophilic agents. 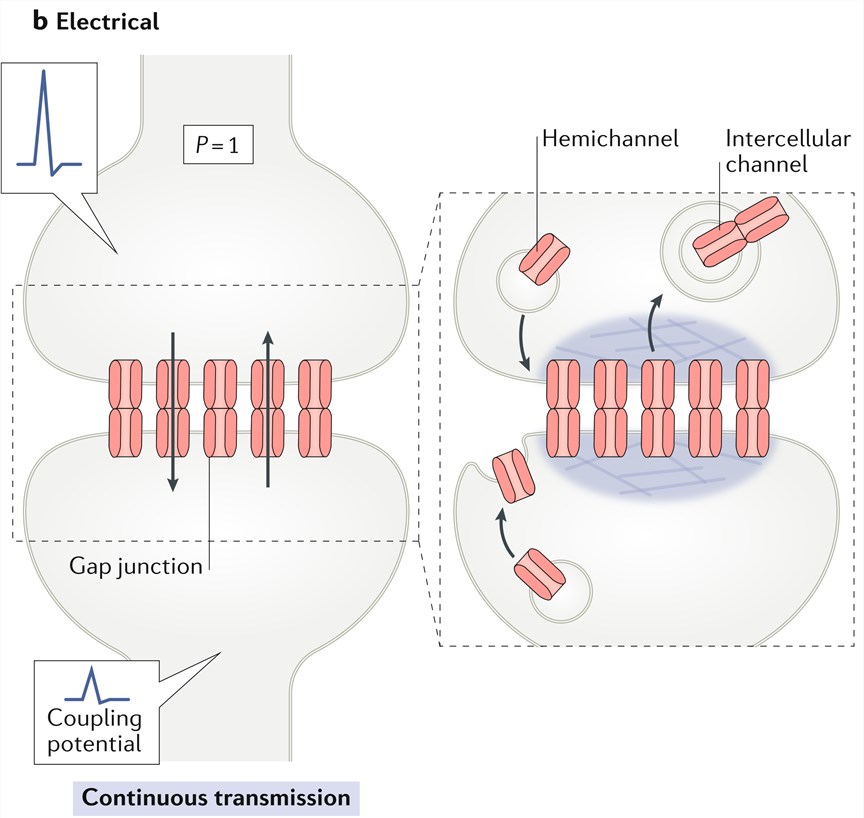 Creative Biolabs has developed a comprehensive neuro-based research platform that contains both neuro research-based products and relevant services to customers around the world. Every effort we made during years of practice is to provide our customers with better and more reliable service.

If you are interested in neuro products and relevant services or have any other requirements, please don’t hesitate to contact us for more information.

Thank you for your interest in Types of Synapses. Please provide us with your contact information and your local representative will contact you with a customized quote. Where appropriate, they can also assist you with a(n):