The nervous system contains many cell types, with estimates ranging from hundreds to thousands of different kinds of neurons and glial cells. This diversity of cell types poses a challenge for those attempting to understand the function of selected cellular subpopulations because the tools for manipulating gene expression in these subsets are limited. Many technologies have greatly facilitated to manipulation of gene expression in specific cell types in the nervous system.

Bacterial artificial chromosomes (BACs): Their use in Studying the Nervous System

BACs are large genomic clones that are maintained in E. coli. BACs can be used as a source of gene-specific promoter sequences due to their large enough to contain an entire gene and its associated regulatory elements. BAC genomic clones have expedited the development of transgenic lines exhibiting cell-type restricted gene expression. These lines should greatly facilitate our efforts to explore the diversity of neural cells. They should provide the starting point for developing animal models helpful in evaluating their functional roles.

The utility of BACs for studying the nervous system was first described to produce transgenic mice expressing enhanced green fluorescent protein (EGFP) in distinct subsets of neural cells. The production of these mice has facilitated functional studies, including electrophysiological analyses, by allowing the direct visualization of discrete subpopulations of living cells. In addition to marking individual cell types, BACs have been used to produce mice that simultaneously label neurons, oligodendrocytes, and glia with different fluorescent proteins. BACs play a major role in that they have provided a quick way of manipulating gene expression in restricted subsets of cells, which is of particular relevance in the cell-type diverse nervous system. BACs may also facilitate the humanization of components of the murine nervous system. Thus, although BACs were first produced as a tool to expedite genomic mapping and sequencing, they have been useful for a diverse range of pursuits. 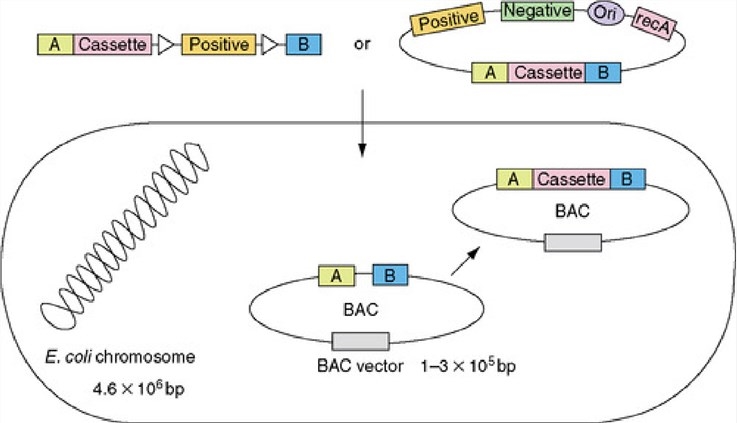 In the context of the viral vector, differences exist in the neuronal cell-type specificity of expression from the promoters. The CMV and RSV promoters have been widely used to provide high expression levels in many cell types. The differences in the function of the CMV and RSV promoters were unexpected, especially about the neuronal cell type specificity demonstrated by the in vivo injections and the brain slices. Either CMV promoters or RSV promoters can produce gene expression in hilar regions, pyramidal neurons, or dentate gyrus neurons. These results have shown that selecting different promoters is an important consideration for the design of viral vectors to target expression in hippocampal cells and possibly other cell types.

Adeno-associated vectors (AAV) hold potential for the expression of therapeutic genes in the context of various neurodegenerative disorders because of their efficient tropism for the neural tissue and their safety and tolerability profile. It needs a well-tailored system to avoid undesirable transgene expression in various cell types of the nervous system and other organs. A previous study has characterized the transduction profiles of an engineered vector scAAV9 under astrocyte (GFA) or neuronal (Synapsin, Syn) promoter. This study shows that scAAV9-GFA-GFP and scAAV9-Syn-GFP respectively led to robust and long-lasting transduction of astrocytes and neurons throughout the entire cerebral tissue, in the absence of aberrant expression leakage in other cell types of the brain or the liver. Therefore, tailoring AAV has the potential interest to drive the expression of therapeutic genes specifically in astrocytes or neurons of the CNS, thus preventing adverse side-effects associated with peripheral expression.

Elucidating brain cell-type specific gene expression patterns is critical for understanding how cell-cell communications may influence brain functions and dysfunctions. Previous studies have analyzed brain cell type-specific expression signatures in mice. Recently, some researchers have identified novel cell-type gene signatures and robust networks from the integration of multiple datasets. The results establish fundamental cell type-associated gene expression patterns in the brain that can be used by investigators studying the cellular and molecular operations of the brain across diverse fields of neuroscience. This tool can be used for many applications, such as cell type enrichment analysis of differential expression signatures, deconvolution of relative cell-type proportions from bulk RNA-seq data, and facilitating the interpretation of network analyses in sequencing experiments. 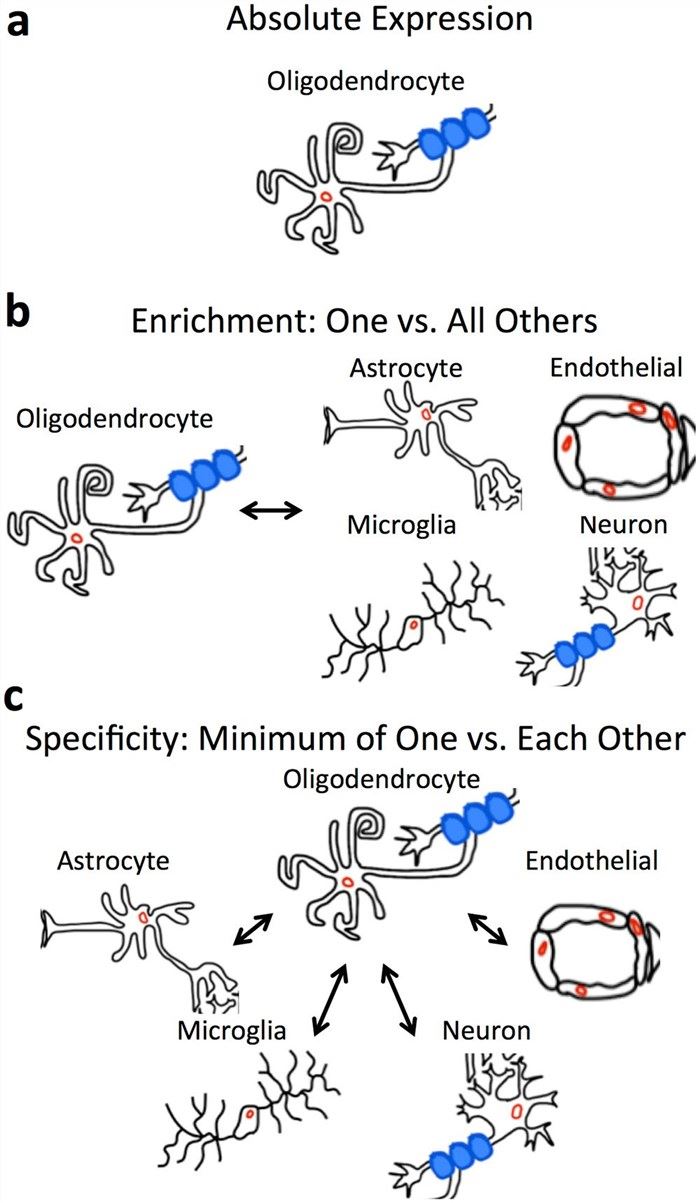 Recent research has demonstrated the need to isolate specific cell populations to determine cell-type specific gene and protein expression patterns. This is a big challenge in the CNS where multiple cell types, such as neurons, astrocytes, and oligodendrocytes, are complicated densely packed. So, the isolation and study of cell-specific populations in the CNS has gained significant interest in the neurosciences to further examine cell-specific gene and protein expression patterns in healthy and pathological tissue and understand CNS function. Several techniques currently exist to isolate or enrich different cell-specific populations, including immunopanning, laser capture micro-dissection (LCM), fluorescent-activated cell sorting (FACS), and the use of magnetically labeled antibodies to target specific cell types.

In the CNS, FACS and LCM are the techniques of the first choice to separate specific cell types. The separation of cells using fluorescently-tagged antibodies which are cell-type specific can be allowed with FACS, and LCM enables the user to trace the cell of interest, allowing cell bodies and their processes to be “captured”. However, LCM is dependent on morphological assessment, which may be difficult to distinguish for some cell types. Also, both technologies require costly, specialized equipment and may not be readily available to all researchers.

The Magnetic-based technique has been available to isolate cell populations using magnetically labeled antibodies targeted to cell-type-specific surface antigens for many years. This approach has recently been used to isolate cells in the nervous system, including neuronal, astrocytic, and microglia cell populations in the brains. Cells can be isolated largely intact, retaining their processes, enabling analysis of cell-type specific gene expression. Thus, magnetic cell sorting proves to be a beneficial technique for examining cell-specific CNS populations for downstream research. 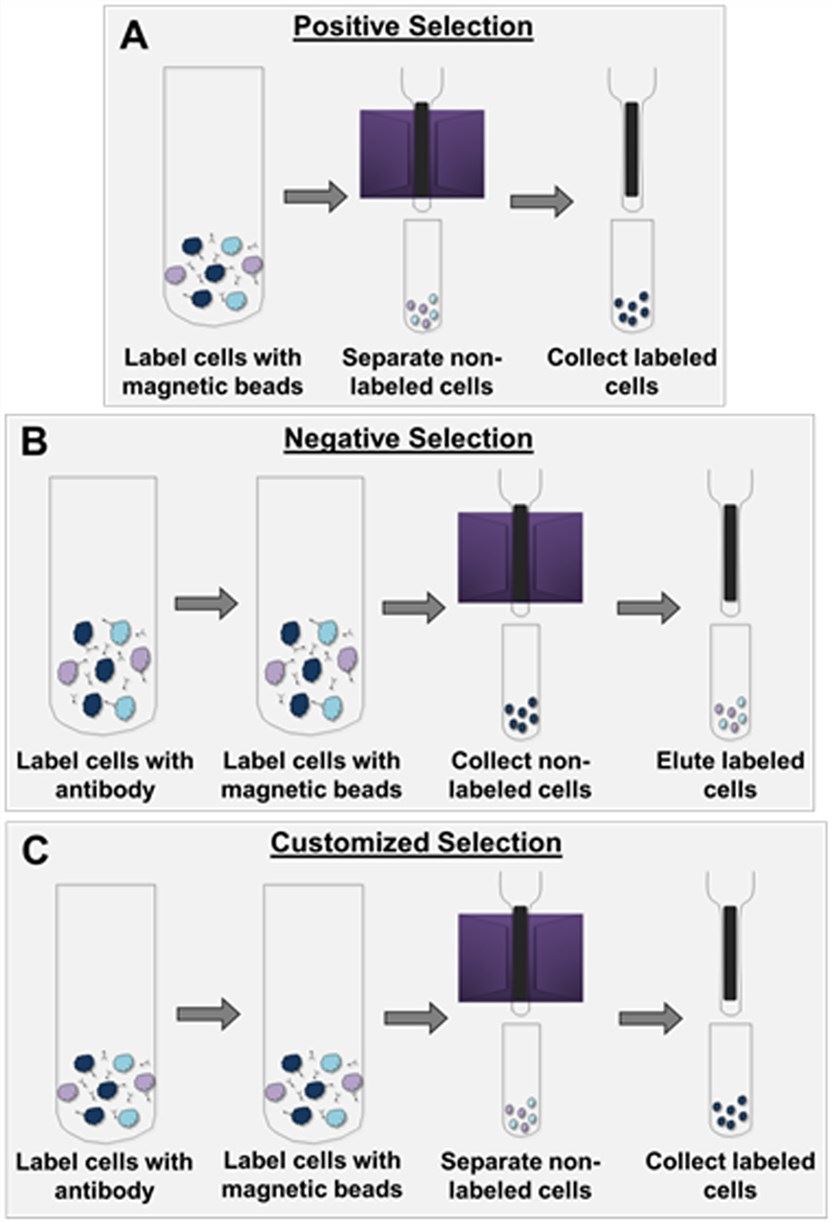 With long-term expertise in neuroscience, Creative Biolabs is the ideal partner to provide a wide range of leading technologies and products for our customers worldwide. We are available to support its customer in terms of technical expertise and custom services and products. Please do not hesitate to contact us for more detailed information.

Thank you for your interest in Cell-Type Specific Expression in Nervous System. Please provide us with your contact information and your local representative will contact you with a customized quote. Where appropriate, they can also assist you with a(n):