A motor system is a group of complex structures that plays an important role in regulating body movement. Up to now, the motor systems have been classified into several levels, including but not limited, the brain stem, the cerebral cortex, the spinal cord, as well as the motor cortex. Moreover, two main loops, the basal ganglia, and the cerebellum have been identified and can interact with the motor system by linking to the thalamus. Previous studies have shown that the motor system can help design and carry out the movement plan, and it is involved in many feedback and fine-tuning mechanisms. Dysfunction of any part of the motor system can cause different levels of motor impairment or loss of function. A wide variety of ascending and descending pathways to the brainstem and spinal cord have been confirmed to be essential to control body balance and movements. Dysfunction of any part of this system can lead to varying degrees of motor impairment, including complete loss of function. Severe Dyskinesia is the last stage of many common degenerative and progressive neurological diseases. 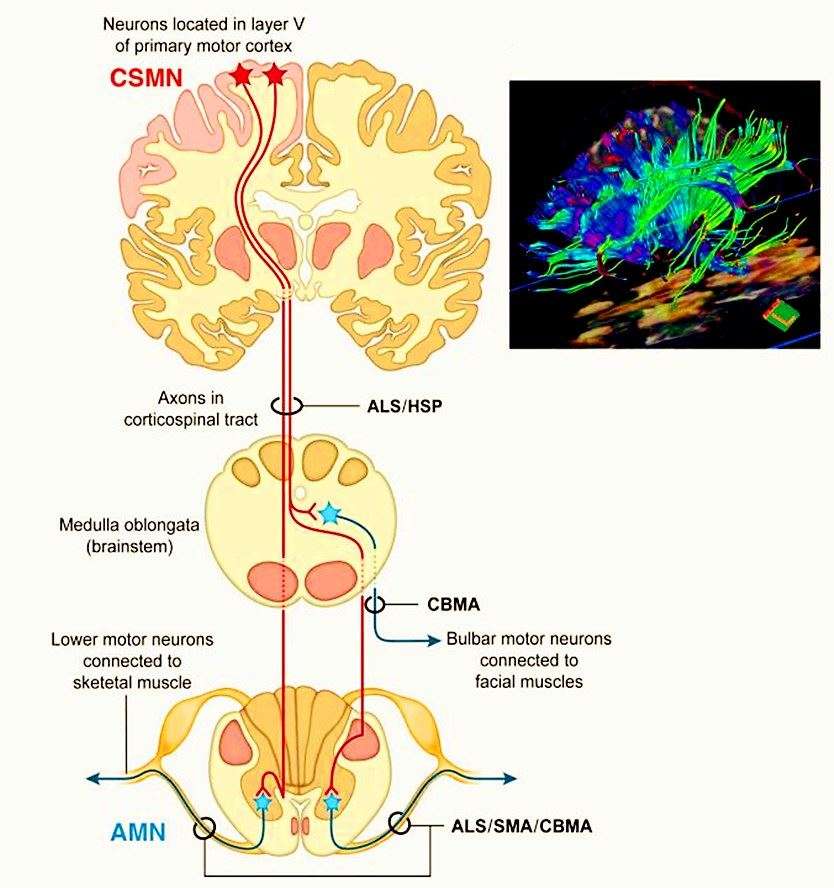 Spinal Control of the Movement

Normally, the motor system is made up of all muscle tissues and their associated neurons. Muscles can be divided into two key subtypes: smooth muscle and striated muscle. Smooth muscle is regulated by the nerve fibers of the autonomic nervous system and skeletal muscle is controlled by the somatic nervous system. Muscles have synergic and antagonistic muscles that can be used to coordinate two types of spinal control of the movement: stretching and flexing. In particular, each muscle fiber is controlled by alpha motor neurons. For example, small motor units can be activated to mediate detailed movements. Meanwhile, muscle fibers are usually surrounded by a cell membrane named sarcolemma. The structure of myofibril can affect the action potential of the sarcolemma, and thus it is used to control the release of calcium ions in the sarcoplasmic reticulum and the contraction of the muscle. Myofibril can be divided into several parts by Z line. During muscle contraction, the skin filaments in myofibril slide along the thick filaments to make the Z lines stick together.

The mechanism of the brain’s control of movement has been studied for more than a century. Early studies have focused on the association between brain injury and motor impairment. Currently, many attempts have been made to develop advanced techniques for analyzing specific motor pathways in neuroscience. For example, electroencephalography (EEG) has been designed and broadly used for visualizing the neural activity of the brain during a motor task. In addition, the changes in brain networks in motor-related regions have been investigated by measuring whole-brain magnetoencephalography (MEG) signals. The data have illustrated that the connectivity of the brain network increases in the movement plan state. It was only the cerebellum and basal ganglia that showed increased connectivity during movement, while other areas associated with exercise showed decreased connectivity. Till now, it has become a hot topic to predict the brain-computer interface (BCI) of movement and to provide new insights on the brain control of movement.

Creative Biolabs is a world-leading services provider in the field of motor system development. We are dedicated to providing customers with different types of nervous systems to meet different purposes of projects. If you are interested in our services, please contact us to discuss your project.

Thank you for your interest in Motor System. Please provide us with your contact information and your local representative will contact you with a customized quote. Where appropriate, they can also assist you with a(n):