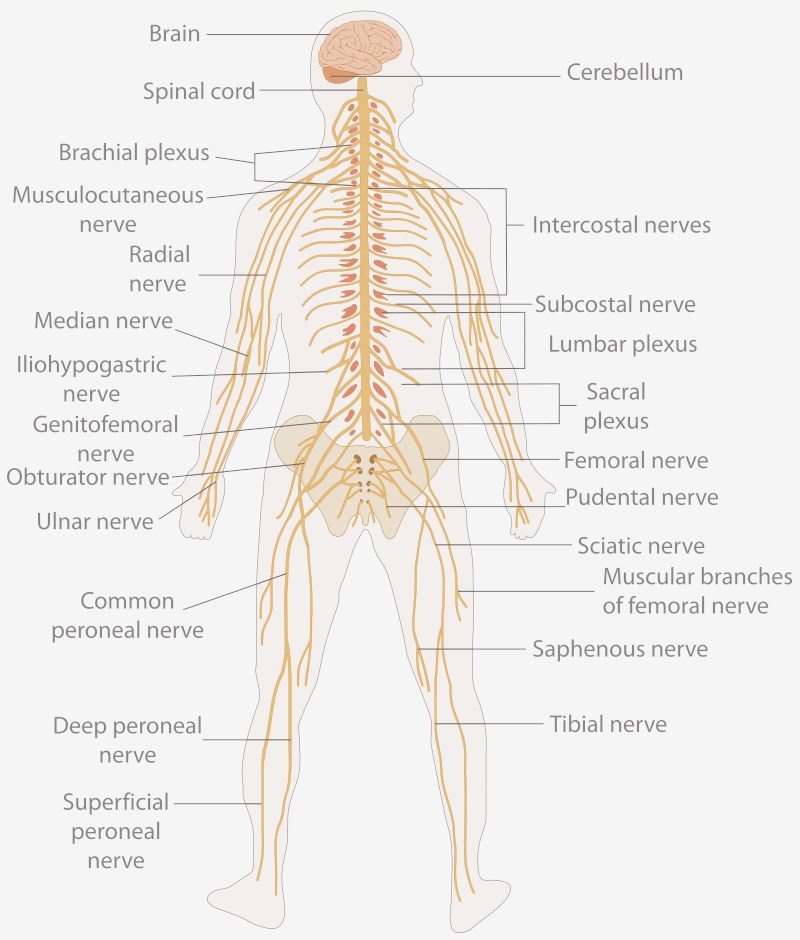 Human CNS is the primary command center for the body and consists of the two main parts:

The brain is a soft, wrinkled organ weighing about 1.3 to 1.4 kg, located in the cranial cavity, surrounded by the bones of the skull. About 100 billion neurons of the brain form the main control center of the human body. The brain and spinal cord together form the central nervous system (CNS), in which information is processed and responds. The brain can be divided into three major parts:

The spinal cord is a long, cylindrical bundle of nerve fibers that connects all parts of the body to the brain. It starts in the medulla oblongata at the upper end of the brain and extends to the waist of the spine. The spinal cord is enclosed in a vertebra and surrounded by meninges.

The PNS consists of all the nerves branching out of the brain and spinal cord, including the cranial nerves, spinal nerves and their roots and branches, peripheral nerves, and neuromuscular junctions. The major role of PNS is to connect the CNS to organs, limbs and skin. The PNS can also be subdivided into two smaller components:

The SNS includes all nerves that run to and from the spinal cord and send information to and from the muscles and senses. It plays a vital role in initiating and controlling voluntary movements and reflex arcs.

There are two major types of cells in the nervous system: neurons and glial cells.

Neurons, also known as nerve cells, are the structured and functional unit of the nervous system. A typical neuron is composed of a cell body, dendrites, and a single axon. There are three types of nerve cells: afferent neurons, efferent neurons, and interneurons. 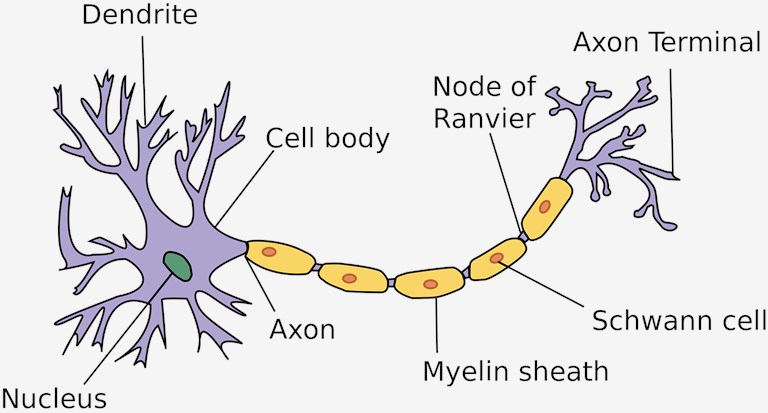 Fig.2 The structure of a neuron.

Glial cells, also known as neuroglia, belong to non-neuronal cells that play a role in protecting, feeding, and insulating the neuron. Each neuron in the body is surrounded by anywhere from 6 to 60 neuroglia. Besides, glial cells also function in maintaining homeostasis, forming myelin, and participating in signal transmission in the nervous system.

Creative Biolabs is devoted to providing a full range of high-quality neuroscience-related products and services to promote the research process of neuroscience. Please do not hesitate to contact us for more detailed information.

Thank you for your interest in Structure of Nervous System. Please provide us with your contact information and your local representative will contact you with a customized quote. Where appropriate, they can also assist you with a(n):