The full name of cAMP is cyclic adenosine 3’,5’-monophosphate. cAMP was the first messenger to be found. There are three main effectors of cAMP: PKA which phosphorylates numerous metabolic enzymes, EPAC which is a guanine-nucleotide-exchange factor, and cyclic-nucleotide-gated ion channels. cAMPs exert essential roles in cellular responses to many hormones and neurotransmitters. The levels of cAMP in cells are regulated by the balance between the activities of two enzymes, cyclic nucleotide phosphodiesterase (PDE) and adenylyl cyclase (AC). These enzymes possess different isoforms which are encoded by many genes. These enzyme genes have different expression patterns and mechanisms of regulation, thereby inducing cell-type and stimulus-specific responses.

AC enzyme, an integral membrane protein, is composed of two transmembrane domains, each of which has six transmembrane α helices. There are two catalytic domains in the cytoplasmic surface of the cell membrane, in which there are two conserved sequences C1A and C2A, which are mainly responsible for the activity of AC. The α subunit of the Gs protein binds to and activates AC, leading to the conversion of adenosine triphosphate (ATP) into cAMP. The increased cAMP levels could activate several effectors, of which the most well-described is cAMP-dependent protein kinase (PKA). When the levels of intracellular ATP, two cAMP molecules bind to each R subunit, leading to the dissociation of the C subunits and rapid kinase activation. The activation of PKA subsequently phosphorylates the protein to elicit cellular responses.

PDE is revealed to catalyze the hydrolysis of intracellular second messenger molecules, including cAMP and cGMP. Inhibition of PDE activation can indirectly increase the level of intracellular cAMP. 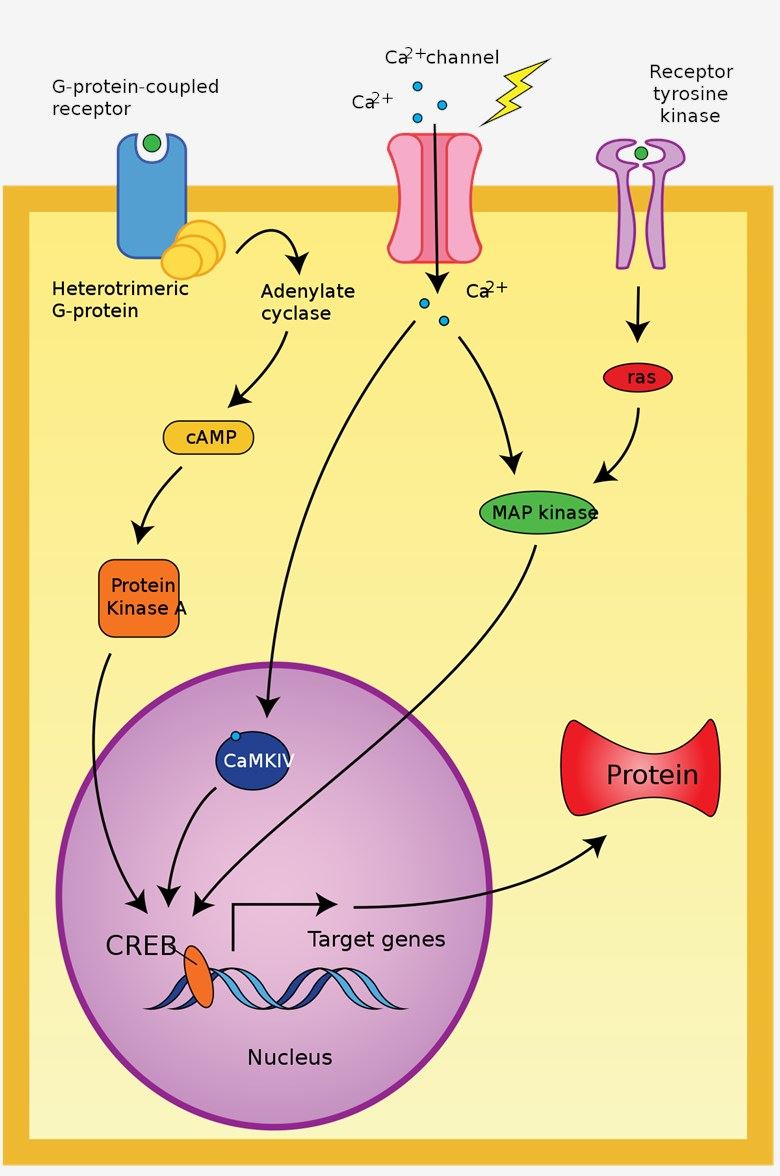 Role of cAMP in Learning and Memory

cAMP is an intracellular second messenger molecule that phosphorylates PKA and is involved in many biological processes, such as gene expression, cell growth, and differentiation. In mammal, PKA has 4 R subunits (RIα, RIβ, RIIα, and RIIβ) and 3 C subunits (Cα, Cβ, and Cγ). Each subunit has been found expression in neurons, especially, PKA-Cβ is highly expressed in neurons, which is required for synaptic plasticity. Studies have revealed the C subunits play an essential role in long-term synaptic plasticity and long-term potentiation.

With years of experience in neural research, Creative Biolabs is very proud of offering the best and low-cost neural research-related products and services. Please feel free to contact us for more detailed information.

Thank you for your interest in Cyclic AMP (cAMP) in Learning and Memory. Please provide us with your contact information and your local representative will contact you with a customized quote. Where appropriate, they can also assist you with a(n):