The Wnt is a group of glycoproteins that consists of many types of proteins in humans, suggesting a series of complex signal regulation and cell functions. The Wnt signaling pathway is a traditional and conserved pathway that plays a critical role in mediating cell activity, neural patterning, as well as organ development. So far, the Wnt signaling pathways can be classified into two main types, canonical Wnt signaling (β-catenin dependent) and non-canonical Wnt signaling (β-catenin-independent). All these two pathways are activated by binding a specific Wnt ligand to a Frizzled family (Fz) receptor. The canonical Wnt pathway is essential for regulating the process of gene transcription. The noncanonical Wnt pathway is critical for mediating the expression of calcium. The expression and secretion of the Wnt proteins need to be closely controlled to induce corresponding short-or long-term downstream signal activation. 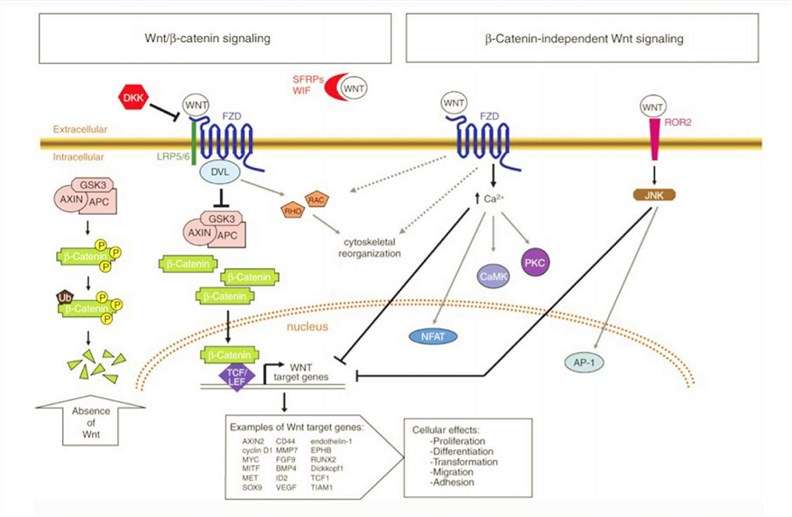 Nowadays, Wnt proteins have become a new class of signaling molecules that are involved in neural patterning, cell growth, and cell determination. Previous studies have demonstrated that the Wnt signaling pathway is associated with the development of nervous systems. For example, numerous data have revealed that Wnt signaling can control the initiation of neural plate formation and neural crest pattern formation in the embryonic nervous system. Moreover, recent work has indicated that the Wnt pathway is also important for the late development of neuronal cytoskeleton and the differentiation of cerebellar synapses. Besides, many researchers have shown that Wnt signaling modulates cell apoptosis and may be involved in the degenerative process that leads to cell death in aging brains.

In addition, the dysfunction of the Wnt/β-catenin pathway has been considered as one of the main causes of various human diseases, like cancer and neurodegenerative disorders. Several signaling molecules of the Wnt pathway have become attractive targets for disease treatments. For instance, Dvl2 null mutants and LRP6 have been implicated in neural tube defects (NTD). Up to now, many attempts have been made to developing novel drugs that target the Wnt pathway for disease therapy, such as Parkinson’s disease. Currently, the benefits of Wnt pathway-associated signaling molecules in the treatment of neurological disorders have also been demonstrated, so understanding the mechanisms of the WNT pathway in the nervous system has important clinical implications.

Creative Biolabs is a world-leading services provider in the field of intracellular signaling cascades studies. We are dedicated to providing custom different types of Wnt pathway solutions to meet different purposes of projects. If you are interested in our services, please contact us to discuss your project.

Thank you for your interest in Wnt Pathway in Neural Patterning. Please provide us with your contact information and your local representative will contact you with a customized quote. Where appropriate, they can also assist you with a(n):