The structural analysis of AAV, together with the understanding of mechanisms that determine the biological distribution and transfer efficiency, can help to design enhanced AAV vectors. The strategic modification of the cap gene may produce delivery characteristics different from any natural AAV variation and have high advantages. Directed evolution has been applied to create new AAV vectors designed to overcome gene delivery barriers and/or preferentially transduce specific cell types in CNS.

Applications of Engineered Viral Vectors to the Study of the CNS

Engineering approaches have been applied to the AAV capsid to create new vectors with improved neuronal tropism. Photoreceptors have been the primary neuronal target in the retina, where intravitreal injections of AAV vectors have been widely pursued and engineering approaches have been applied to generate new AAVs. For example, intravitreal administration of AAV2-4YF, a quadruple Y-to-F mutant, mediates expression throughout the mouse retina, but only at high doses. In the retina, the Muller cell-tropic AAV vector ShH10 was utilized to study the role of glial cell secretion of ciliary neurotrophic factor (CNTF) in axonal regeneration. ShH10-mediated expression of CNTF was sufficient to promote long-distance regeneration of severed optic axons in a mouse optic nerve crush trauma model.

The neural stem cells (NSC)-selective AAVr3.45 was harnessed to deliver constitutively active b-catenin (CA b-catenin) in the mouse hippocampus. The result was significant increases in the number of NSCs, neural progenitor cells, and neurons in the hippocampus, indicating that b-catenin signaling increases neurogenesis via modulating both proliferation and differentiation of NSCs.

AAV has also been engineered for enhanced neuronal tropism and spread in the brain. For example, tyrosine mutations on the AAV2 capsid improve neuronal transduction in the rat brain. A randomly shuffled chimeric vector called AAV-B1 delivered 8.6-fold more vector genome copies to the brain than AAV9 upon intravenous administration, facilitating higher neuronal transduction in the motor cortex, thalamus, and spinal cord. In addition to genetic manipulation of post-mitotic cells in the CNS, interest in exploring and improving the regenerative capacity of the adult mammalian brain has fueled the generation of novel AAV vectors with improved in vivo delivery to adult NSCs.

AAV1 was recently established as a superior anterograde tracer compared to other serotypes in the corticocollicular pathways of the murine brain but required high titers and Cre-mediated amplification to unlock robust transgene expression in up to 40% of postsynaptic V1-recipient neurons. In contrast with replication-competent transsynaptic tracers that spread uncontrollably across multiple serial synapses, AAV1 only tags first-order downstream structures, providing more precise labeling of neural circuits. This attractive feature compels the development of modified AAV vectors with enhanced transneuronal transduction, and a more comprehensive mechanistic understanding of anterograde transport may benefit these engineering efforts.

The natural serotype AAV9 can cross the formidable blood-brain barrier (BBB) in the adult mammalian brain, resulting in widespread astrocytic transduction but sparse neuronal delivery. AAVrh8 and AAVrh10 were subsequently shown to display similar biodistribution profiles in the CNS.

Directed evolution has also recently been employed, in combination with a Cre-dependent selection strategy, to isolate AAVs capable of crossing the BBB. With this approach, AAV-PHP.B, an AAV9 variant containing a 7mer peptide insertion, was found to transduce most astrocytes and neurons and a moderate fraction of oligodendrocytes in multiple regions after intravenous administration, resulting in at least 40-fold greater gene transfer throughout the CNS than AAV9 in the mouse. AAV-PHP.A, another clone that emerged from the same selection, exhibited weaker but more selective astrocytic transduction than AAV-PHP.B. 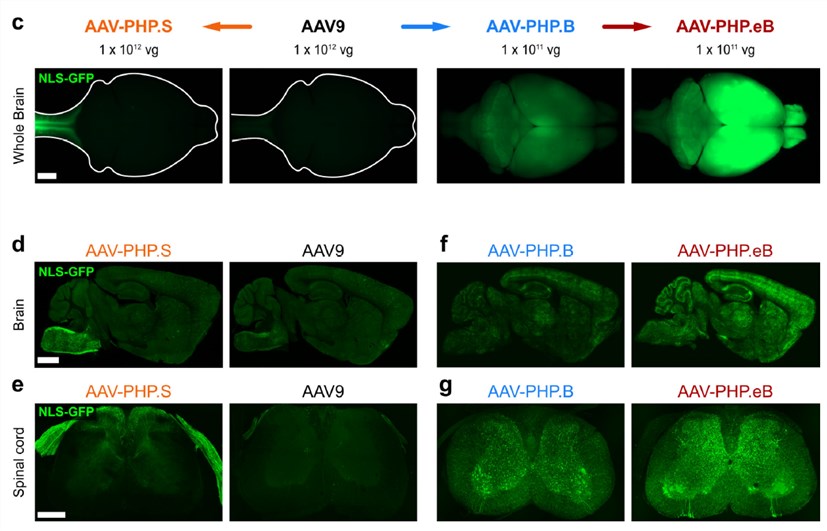 Different natural and engineered AAV variants have delivery properties that vary by cell type, tissue target, and species; therefore, the variant must be carefully chosen to suit a given application. Such engineering approaches will further build momentum for AAV’s application to both basic biological investigation and therapeutic translation. Creative Biolabs offers well-established and innovative one-stop-shop engineered viral vectors solutions for nervous system studies. If you want to know more, please do not hesitate to contact us.

Thank you for your interest in Engineering Viruses for Nervous System Studies. Please provide us with your contact information and your local representative will contact you with a customized quote. Where appropriate, they can also assist you with a(n):